Weeaboo (Not to be confused with Otaku) is a term associated with western fans of anime, and the culture surrounding them. This word has taken on many different meanings and connotations throughout the years, making the meaning of it in specific instances highly contextual; however, It all is centered around a western love of anime and/or Japanese culture, with the variant being how this love is viewed/expressed.

The different connotations of Weeaboo can be seen represented in the current split of the term between Weeaboo and Weeb.

The current term Weeaboo is only just the modern iteration of a term for western lovers of Japanese culture/media. The first recognizable instance of such a term came from the 18th century, and was called Japanophile.[1] It should be noted though that this sort of term was not exclusive for Japan, as there are many similar terms such as Anglophile, Germanophile, and Ailurophile). These terms are used for a person with a love and appreciation for a specific culture, though the context and connotation varies term to term.

The first instance of a term resembling the modern iteration came around 2000 from the site 4Chan, where the term Wapanese caught traction.[2]

The first appearance of Weeaboo came from a comic by Nicholas Gurewitch, as a meaningless word used for a punchline. Around 2005, 4chan users began using this word[2] as a replacement for Wapanese, with moderators of the site creating a word-filter to that actively replaced each instance of Wapanese with Weeaboo.[3]

Since then, the term has been shortened to Weeb, though it would be wrong to say definitively that the two versions of the term share the same meaning.

Weeaboo, despite its variability, is most commonly used as a derogatory term describing a person who is overly obsessive with Japanese culture and medium, to the point where it effects their personality, mannerisms, and daily life.

This term is commonly associated with younger people, usually in middle school or early high-school, though it can be used for anyone regardless of age.

As stated in the beginning of the article, the meaning of the term is highly contextual, and that especially goes for the term Weeb. While it is still used derogatory, the general use of the term tends to be either ironic, or used to refer to someone who simply enjoys Japanese culture and/or media, but as no obsession with it or use of it as a personality trait.

The culture revolves around mostly Anime, Manga, and Japanese fashion. its stereo-typically an obsession with Japanese culture, portrayed through the lens of a westerner who's only real view of japan is through anime and other similar mediums. 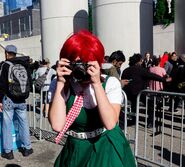