Trigger warning: This article discusses drugs, eating disorders, slurs, and mental illness. If this sort of content has the potential to be triggering to you, please turn back from this page.

Waif is a type of blogger who posts content relating to rich, beautiful, intelligent, self-destructive, and manipulative teenage girls, wherein the imagery reflects the lifestyle that such a young woman would have. Largely, "nepotism girls" (female celebrities who got to their fame via nepotism), models, ballet dancers, and boarding school students are examples of these types of characters.

Arguably, it can be seen as a continuation of Heroin Chic, and it was influenced by Dark Nymphet, Fairy Grunge, the Pro-Ana/thinspo community, and the humor of the podcast The Red Scare. In addition to aesthetic images, much of this information comes from memes, whisper confessions, and text posts of things happening within their personal lives.

What distinguishes this aesthetic from the previous aesthetics above is the persona of these bloggers. Rather than portraying themselves as delicate and broken, they put on a confidence and rudeness that shows independence and openness. Specifically, the memes and text posts produced have a flippant or egocentric tone. However, these girls are using it as an expression of their mental illness. In addition to the glamour of independent and precocious lives of parties, money, and influence, there are multiple references to drug use, depression, eating disorders, and the desire to gain male attention from their looks.

This article is under construction

This aesthetic first appeared in 2020 on Pinterest, accounts who have had this aesthetic usually have boards dedicated to whispers, certain aesthetics and horror shows.

On tumblr, these photos are proliferated through mass-tagging, some of which include the names of authors considered part of this community's canon and their books, ballet, Lana del Rey, Lizzie Grant (Lana's stage name), Lilly Rose Depp, heroin chic, etc.

The girls who participate in this aesthetic have a preoccupation with becoming beautiful through becoming skinnier, having attractive clothing, and projecting an attitude resembling a desirable and confident person. The reason for this is that they recognize the social rewards for being so. The aesthetic's alternate name, "female manipulator," proves this, and through being determined to lose weight, multiple benefits such as modeling contracts (and thus, money)[1], being let into parties, being given free things by admirers, etc. could happen.

As previously mentioned, gaining wealth and admiration is a common goal amongst these young women, and multiple memes and manifestation videos show their desire to be more intelligent. Despite partying and doing drugs having a strong emphasis, literature and prep schools are romanticized as a way to cope with the stress of school and being a high-achiever. Like in Dark Academia, pretentiousness is celebrated, and works of media considered prestigious (Dostoevsky, Sylvia Plath, etc.) are used to relate to their experience and a conversation topic rather than drudgery that other teenagers may believe.

This leads into the community's common association with mental illness and personality disorders. All of the works listed in the media section feature protagonists who have these issues (psychopathy in American Psycho, psychosis in Black Swan, depression in The Bell Jar, etc.) and the bloggers often express these characters' relatability to themselves.

The persona of a femcel girlblogger is also steeped in irony. The community acknowledges its chronically online and mentally ill demographic that clashes with the imagery of the successful models and actresses in its imagery.

Images of glamorous types of people are one of the most common photo subjects. These are women who carry across the energy of this aesthetic in that they are beautiful but have an unapproachable and cold aura about them. Thin, with either blasé or cheeky expressions, and unglamorous clothing are their common qualities. Supermodels, often Devon Aoki, Anya Taylor Joy, Kate Moss, and Lily Rose Depp in candid photos with unprofessional lighting and grimy environments are popular.

Fashion images are the next most popular subject. Runway details, designer storefronts, shopping bags, and cosmetics showcase the beauty of these girls and the aspirational lifestyle they have.

Ballet is another important visual, specifically those of ballet academies in Russia. Rather than images of performances with full costumes, however, these images always take place during class or independent practice. The colors associated with class uniforms and the setting: black, off-white, pale pink, and gray, fit the color palette. Images of "what's in my bag" for ballet students are also popular; pointe shoes, ipods, towels, magazines, etc. arranged haphazardly are common.

Building off from above, Russian culture is frequently referenced in fashion (fur hats), literary tastes, memes about ballet, and whispers expressing the desire to move to the nation. The stereotypical image of a Russian woman: conventionally attractive, thin, pale, blonde-haired, and blue-eyed and the fact that Dasha Nekrasova, the more popular host of The Red Scare podcast, is from Belarus would contribute to this admiration.

There are frequent references to having cigarettes and black or iced coffee, which are substitutes for food that have connotations associated with sophistication. Likewise, canned diet coke is another common photo subject and a reference to anorexics. Schnapps and vodka, especially cherry-flavored, refer to the Lana del Rey song "This is What Makes Us Girls," Russia fixation, and party lifestyle that these girls strive for.

Catholic school imagery is also popular. Schoolgirls in uniform, nuns, Bibles, and rosaries often appear as visuals. In whispers and text posts, these young women regularly joke about their Catholic upbringing, such as the religious trauma they experienced and the inside jokes that comes with living through similar life experiences.

Similarly, prep school in general is often referenced. Images of Rory Gilmore and other fictional characters or celebrities in school uniforms reading and holding books of high literary merit are common. Literature is celebrated, with books by Sylvia Plath, Dostoevsky, and the Bronte sisters appearing in memes and bookshelf images.

One of the main modes of conveying this aesthetic are whispers, which are from an app of the same name. In them, users have to overlay a confession over an image. Waifs use imagery that matches the aesthetic, and text that communicates the typical thoughts relating to the characteristics of a waif. Word salads are fairly common, and describe the aesthetic in an overwhelming, chaotic way that mimics some prose of authors that these women read.

Slogans and a shared vocabulary are also incredibly repeated in this community. Some of them include:

Edited screenshots of news articles from the digital magazines Vulture and The Cut are common, where, instead of a fashion/cultural title, the magazine would "report" on the mundane activities of a "girlblogger," (a young woman who is chronically online) or a model.

Memes are an incredibly common way to link these aesthetic visuals together and create a community. One format that is incredibly popular is the "I would go to school if..." meme where "if this were the teacher" is captioned under an image of a model, "if this was the uniform" under the fashion with the aesthetic, "if this was the lunch" under diet coke and cigarettes, etc. Another common meme is the "Are ya winning, daughter?" format edited with pngs of the visuals, garments, albums, and books associated with the community surrounding a simple drawing of a crying girl and her father checking in on her. The "You are the average of the five people you spend the most time with. The five people in question:" template overlays the quote above and different outlines of five people with pngs of the above visuals. Another is a comment/tag game where an image with different waif-related categories of media and visuals (books, albums, beverages, types of skirts, etc.) are in rows with numbers, letters, and symbols above each item. A user then puts the symbols of what they would pick from each category in the comments.

Outfit moodboards and object collections link the different components of the aesthetic together. The outfit is often accompanied by transparents of coffee, newspaper headlines, cigarettes and other drugs, and books.

There are also multiple variations on the aesthetic, with users leaving out certain elements or adding images with Preppy, Nymphet, Vintage Parisian, and Shabby Chic aesthetics. The constant between all Waif bloggers is their admiration for models and the shared language and memes.

For the purposes of citation and examples, see the Wayback Machine archive of the tumblr tag.

The music associated with the aesthetic originate mostly from Pale Grunge 2014 tumblr.

Note that this is all said online, meaning that a lot of these party and drug references are not necessarily true, and these young women could be making confessions for the sake of gaining popularity and exploring fantasy, rather than actually living out the lifestyle of a waifspo character.

New Age spirituality/teen girl pseudoscience is popular in this community, specifically with "manifesting," where people focus their thoughts to bring money, beauty, success, etc. into reality. This can also be brought on by listening to "subliminals," which are videos of montages set to music that would supposedly implant subliminal messages into the brain and bring about whatever the video's purpose is. Some common subliminal video topics include becoming skinnier, richer, and having an enhanced confidence.

Of course, the largest and most obvious criticism of Waif is the encouragement of eating disorders. In creating a clique where a BMI below the healthy amount is encouraged, young women may begin to develop anorexic behaviors in order to fit into the in-group.

Many people, especially tumblr veterans, simply find this community annoying. Because their posts are formulaic and use consistent visuals and meme formats, they quickly become repetitive. This is especially true when Waifs use an abundance of tags that are unrelated to the photo. For example, tagging Vladimir Nabokov in an image of supermodels. 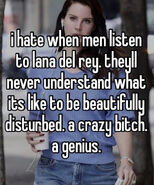 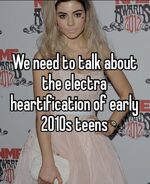 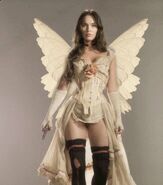 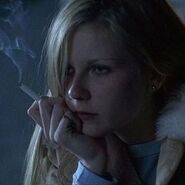 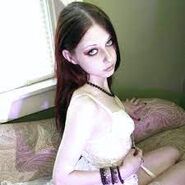 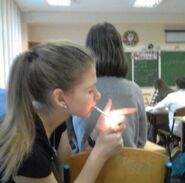 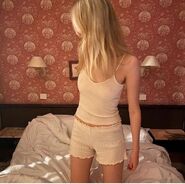 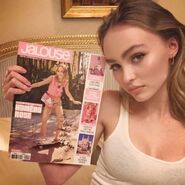 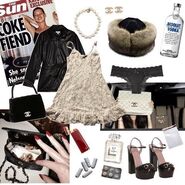 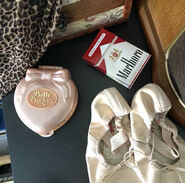 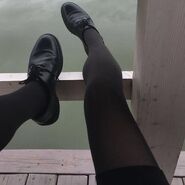 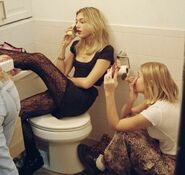 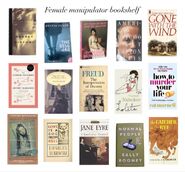 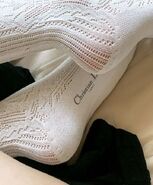 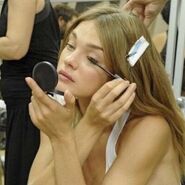 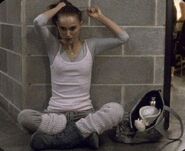 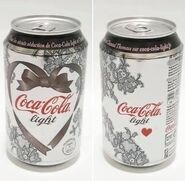 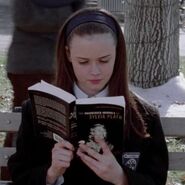