Victorian Goth is a style that merges the classic trends of Victorian fashion with Goth sensibilities. Not to be confused with Romantic Goth, which pulls inspiration from the Romantic era which began at the end of the 18th century and ended in the mid-1800s before the Victorian era had properly landed.

Victorian Goth imagery includes dark-coloured Victorian-era clothing with a dull/greyed background. In Victorian Goth, the fashion and clothing is the focus. Dark Victorian dresses and suits are staples of this aesthetic, along with gothic accessories/makeup. Backgrounds tend to be in nature - a contrast to the regal, delicate appearance of the people in the foreground.

Popular items in this style include:

As with many other Goth aesthetics, many pursuing the Victorian Goth appeal dye their hair black, but others choose to keep a natural color for a sort of period accuracy and lean more towards a pure Victorian style with a simple hint of Goth.

Victorian Goth music is very similar to Victorian music, but has a slower and darker melody and tone than most Victorian music. Most Gothic Victorian music was not composed during the Victorian era, instead being composed in modern times - possibly influenced by modern gothic music. 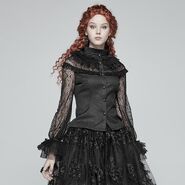 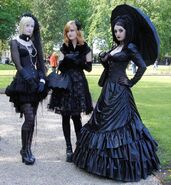