VSCO is a family of aesthetics named in reference to a photography app called VSCO (formerly known as VSCO Cam), created by Joel Flory and Greg Lutze in 2011. VSCO gained prominence with its in-app suite of features that allow users to edit with preset filters and tools. Since its rise in popularity, the VSCO aesthetics have rolled over into other platforms.

E-Girl (the Yin to the VSCO's Yang)
Hippie
Art Hoe

VSCO girl is a term originating in Summer, 2019, based on the photography app VSCO. Although the subculture itself did not originate from the app, the two are related somewhat. VSCO girls often use the phrases "and I oop" and/or "sksksksk" and are often compared to E-Girl (though aesthetically speaking, the two are opposites). The fashion is described as preppy but laid-back. They're also associated with Hydroflasks, (a type of reusable water bottle), Polaroid cameras, TikTok, and the "save the turtles" movement.

VSCO Girl style consists of scrunchies, Fjällräven Kånken backpacks, oversized shirts, Nike shorts, and the often judged combination of sandals and socks. Then again, they also wear Vans, Crocs, and Birks. They seem to be stereotyped, with people imitating them on the app TikTok. Common phrases they have are 'save the turtles', 'and I oop,' the phrase popularized by drag queen and RuPaul's Drag Race contestant, Jasmine Masters. and 'sksksksk'

They are also known to have a Hydroflask, and also have a Jeep. Additionally, they also own shell necklaces and will sometimes wear a tube top and jean shorts along with some friendship jewelry. Hobbies they are known to do are trampolining, sleepovers and are almost always at Starbucks. Their hairstyles are mostly known to be a messy bun.

Other items involved in the aesthetic include:

(the Yin to VSCO's Yang)

VSCO Boy is an aesthetic that involves a person (preferably male) who uses the app VSCO, the male counterpart to VSCO girls, or an ideal VSCO boyfriend. It involves riding a skateboard, wearing Vans sneakers, and having a Hydroflask with a bass pro hat and long hair. An example of a VSCO boy is Boaz Omunga.

Dark VSCO is an aesthetic that similar to VSCO girl but is more mature and has darker themes. The colours are more muted, usually consisting of light or dark grey, black and white. The patterns are more minimalist and simplistic compared to the bright colors of the original VSCO girl style. Although the style is darker it still has VSCO components such as scrunchies, converse, and Hydroflasks.

Makeup is kept simple and fresh, no makeup is an option as well. Messy buns and loose hair are common, but braids and ponytails also an option.

A winter VSCO girl is similar to a regular one, but adding some wintery aspects. Such as fuzzy socks, warm Starbucks drinks, sweaters, comfy shorts, and a warm yet trendy feel.

Sweatpants, comfy shorts, long sweaters, beanies, white things, silver and grey, tennis shoes, boots, etc. For fashion is warmer seasons, a popular option is t-shirts that say things like "winter bae" on it. Comfy shorts are an amazing option for summer and warmer seasons. Prime season for Winter VSCOs, though is Winter.

Makeup is in light blues and whites, very natural, not often seen wearing dark eye shadows or lispsticks. Clear lip glosses are a good option, and so are clear mascaras. No makeup is a rare but fitting nonetheless option.

Autumn VSCO is a combination of VSCO and Autumn aesthetics. Aspects of Autumn VSCO include:

Hair for Autumn VSCO is normally curled or wavy, often down. If you have to have your hair up, do a messy bun, a half up half down, or something like that.

Autumn VSCO makeup is light. Red or nude lipstick are the most common along with mascara and warm eye shadow. 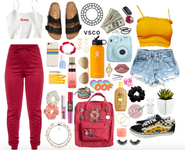 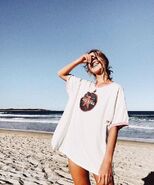