Traditional Polish is an aesthetic that revolves around the traditions and folklore associated with the Polish-Lithuanian Commonwealth, its nobility and various other groups. There are variations which vary depending on influences, social status, wealth and area.

The Polish-Lithuanian Commonwealth was a melting pot of cultures and religions, its borders incorporating Ruthenia and Lithuania. The Polish nobility was, however, the most influential.

The szlachta had many unique and strict traditions, emphacising defending their homeland and honour. They, accordingly to their wealth, were divided into:

The Polish nobility was the most dominant and had a great influence over the Lithuanian and Ruthenian part, as both of the latter were subject to polonisation. Throughout most of the class' history, it followed the same Sarmatism concept - the dominant Baroque culture and ideology of the Polish nobility. The main part of a typical gentry outfit was a robe called żupan, often worn with a long fur trimmed coat kontusz, knee high boots and sirwal trousers. Another important part of szlachta attire was the polish sabre (szabla). The most common types of that sword were the closed hilt hussar sabre or the open karabela sabre. There were, however, cases of of french or even puritan attire.

The Polish middle class formed itself around the 13th century. In order to meet the conditions for becoming a burgher, one had to first acquire a municipal citizenship under certain legal conditions regulated by the sometimes very strict municipal regulations. The burghers often gained wealth through craftsmanship or engaging in trade. The cities often had jewish communities and a lower class without its own rights called plebs. Their clothing did not differ largely from typical European townsfolk, only having certain Sarmatian influences.

The Polish peasantry was largely uneducated and isolated from urban communities. We can identify several distinct ethnographic groups, mainly Łęczycanie, Sieradzanie, Małopolanie, Mazowszanie, Mazurzy i Warmiacy, Pomorzanie, Ślązacy and Wielkopolanie. Another group were górale, inhabiting the Polish highlands. Each had its own unique way of dressing and in some cases a local accent.

Playlists and channels with different artists 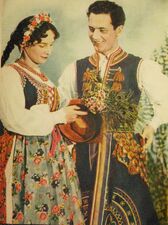 Retrieved from "https://aesthetics.fandom.com/wiki/Traditional_Polish?oldid=33596"
Community content is available under CC-BY-SA unless otherwise noted.