Trad goths have been accused of elitism and gate-keeping due to expecting people who label themselves goth to know the history of the sub-genre. For more information on this phenomenon, check out this video.

Music is incredibly important to Trad Goths. These bands and artists include: 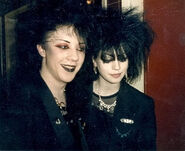 Retrieved from "https://aesthetics.fandom.com/wiki/Trad_Goth?oldid=44488"
Community content is available under CC-BY-SA unless otherwise noted.