Thriftcore is a aesthetic with the theme revolving around clothing, toys, furniture, and more of the like in thrift shops and garage sales. People who are involved in this aesthetic have “Thrift Hauls”, where they purchase goods from thrift stores.

Thriftcore visuals put a strong emphasis on vintage and retro goods that are bought at thrift stores. While the most popular items bought at thrift stores are clothing, some people will buy retro toys, furniture, old electronics, and things that are sold in major retail locations. The only downside to this is you are at the mercy of whatever the thrift store has in stock, and that can change from day to day.

Visuals are also taken from historical images taken in the 60s-90s eras, old worn photos are best as they give an aged look that give the vintage color. Stacks of records, Polaroids, concert venues and live shows, are all examples of Thriftcore aesthetics.

More examples can include album covers and photos of musicians from corresponding eras.

Thriftcore fashion, (also known as Thrift Store Chic) is a style of dressing where clothes are cheap and/or used. Clothes are often bought from thrift stores such as the Salvation Army, Goodwill, or Value Village. Common styles may include styles by decade. Many articles of clothing may be found in thrift stores or secondhand, vintage items are common. This may include:

Most of the music listened to by Thriftcorers is 1960s-90s music. They listen to bands including but not limited to: 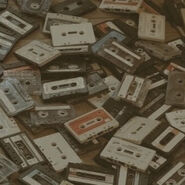