Hatsune Miku, Vocaloids
Technical Scene is usually classified by a mix between usual dark goth and emo culture, and modern or past technology and machinery, such as motherboards or typewriters.

The origins of the aesthetic are currently unknown, as so is the time of origin. It can be assumed it's between the 1980s and 2010s, a main era of technology and dark themes.

Technical Scene is characterized by its mix of dark and depressing themes and machinery. The images almost always contain dark colours such as black or gray, and some form of something computer related, such as an error screen or just a random computer part.

It can be assumed that, just as the images combine the cultures of goth and emo with more technology based themes, that the fashion would also. Examples may be:

Technical Scene music is defined by the usual punk and emo style with some chiptune and other computer sounding topics or sounds thrown in. An example is Algorhythm by Childish Gambino, a mix of computer sounds and topics with a normal punk-like theme.

Hatsune Miku and most Vocaloids have a Tech Goth theme in most of their song. The biggest example of this is Hatsune Miku and her song The Disappearance of Hatsune Miku. Throughout the song and music video, you can see computer related things, as Hatsune herself is a robot. The song has an emo theme, of Hatsune Miku disappearing (evident in the title). 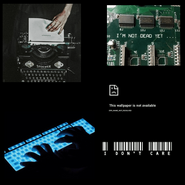