Sweet Lolita is a substyle of Lolita fashion which is characterized as the most child-like of all the styles, and including cute, girlish motifs such as bows, ruffles and light colors.

It follows the basic Lolita silhouette featuring bell skirts, JSKs and dresses. These are worn with bloomers to create the "bell" shape that is associated with Sweet Lolita.

Hair in this style is seen being worn in pigtails, down, in a bun or odangos, or braids. Ponytails are very rare. Another common hairstyle is curled hair, to give the hair a shinier, softer look, particularly in pigtails. Split colored wigs and pastel colors wigs have become more popular in Sweet Lolita within recent years. The makeup is mostly light and neutral.

Motifs and imagery most often seen in Sweet Lolita are desserts, berries, animals, flowers, childlike fantasy elements and children's books. The colors usually seen are baby pinks, whites, pastels and blues. Darker colors can be used, but only in very small amounts as enough darker colors would make the outfit Bittersweet Lolita, not Sweet. 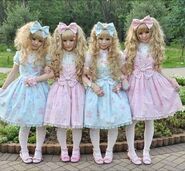 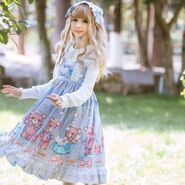 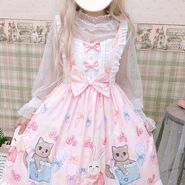 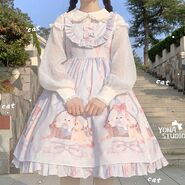 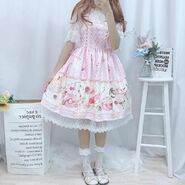