The formation of Earth

Whatever higher power you believe in

Autumn
Heatwave
Poolcore
Seapunk
Spring
Tropical
Vacation Dadcore
Winter
Hispanicore
Summer is the hottest season of the year and an aesthetic that involves the season of the same name. It can also be a reference to Summer fashion styles.

It is widely considered the favorite season of many, considering that it is the vacation period of schools and many adults, attributing it a more carefree, cheerful and high-energy spirit. Commonly associated with beaches, as they are popular travel destinations on holidays, but also pools, as they also help with cooling off from the heat. Summer is also the perfect time for practicing outdoor or aquatic sports, like swimming, surfing, volleyball, football, and cycling to name some examples.

It's the season for refreshing drinks, like iced tea, juices of any kind, coconut water, cold beers and martinis, and foods like exotic fruits, salads, popsicles, ice cream, and grilled meat, as a lot of people enjoy doing grills during this season.

Despite its mostly happy and tropical front, Summer has also a more melancholic side; a lot of examples from the media like music and literature explore the feelings of emptiness and boredom, due to cluelessness of what to do with so much idle time, and also heartbreak, as many teens and adults utilize their free time during vacation to be more...promiscuous.

As the temperatures rise, and as many people take advantage of the extended hours of sunlight to get more tanned, the clothing of this period is very light, and shows more skin. The color schemes tend to be more bright and more diverse, as well as more patterned clothes. 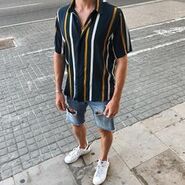