James Bond
Spy Fiction is a genre that involves espionage, the covert gathering of information to be delivered to a third party.

Issues with Diversity and Representation

Spy fiction tends to be written by white men. Because of this, female characters are often subject to sexist treatment, or are placed in non-consensual sexual situations. Characters of color, when they appear at all, are subject to slurs and stereotyping.

Extreme violence such as torture and gun violence is common in spy fiction.

The oldest spy story can be found in the Book of Joshua in the Hebrew Bible. Spy fiction is generally associated with the World War Two and Cold War eras, but spying and secret agents have existed during many wars as well as in times of peace.

Spies can work solo, as investigators for hire who report to the person who hired them, or be part of a larger organization. After the Cold War, the discovery of espionage training programs led to the appearance of spy schools in fiction.

Spy fiction in the 1960s could be extremely serious, reflecting the fears of the public during the Cold War era or it could be humorous and lighthearted, in an attempt to push back against these fears. Humorous spy fiction often parodies more serious spy fiction with references to characters and titles which existed previously.

In the late 20th century, spy fiction began to be marked to children. Children's spy fiction is free from the violence and sexual content common in spy fiction created for adults.

Spies have a large variety of skills which they can be called upon to use during missions. Many of these are associated with the lifestyles and aesthetic of the wealthy.

Spies often desire to blend in with their surroundings as opposed to standing out. Colors like black, gray, tan, brown, navy and green are worn in clothing. Layers are worn for warmth and for ease of disguise. Shoes are usually easy to run, jump, and climb in. Much of the clothing associated with Spy Fiction is inspired by spy movies from the 1960s, when characters wore black turtlenecks and tan trench coats. A trench coat and fedora hat is often used to symbolize a spy's disguise, although this outfit is so out of fashion in today's world that it would be a completely ineffective one.

Music in spy fiction covers nearly every musical genre from opera and classical music to pop and rock music. Classical music and opera is often associated with villains in spy fiction who are wealthy or who enjoy the aesthetic of wealth and luxury. If the spy fiction is set during a historical time period, popular music from the day is used. Extremely annoying or loud music can be played as a torture technique. 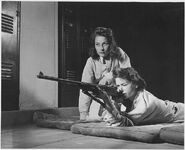