Art Nouveau
Green
Lunarpunk
Naturecore
Cyberparadism
Solarpunk is a genre of speculative fiction that is also its own distinguished aesthetic, focusing mainly on renewable energy, living in harmony with nature, and the better future envisioned through both. Solarpunk also emphasizes handcrafted wares (as opposed to mass-produced products) and community. The 'punk' in Solarpunk comes from the genre's anti-authoritarian and anti-capitalist nature, as well as its strong focus on community and prefigurative politics, which separates it from aesthetics like Cyberprep.

Solarpunk futurism is not nihilistic like cyberpunk and it avoids steampunk's potentially quasi-reactionary tendencies: it is about ingenuity, generativity, independence, and community. At its core, Solarpunk is a vision of a future that embodies the best of what humanity can achieve: a post-scarcity, post-hierarchy, post-capitalistic world where humanity sees itself as part of nature and clean energy replaces fossil fuels.

The visual aesthetics of Solarpunk are open and evolving. They include a mash-up of the following:

While Solarpunk is a relatively young literary sub-genre, there are stories that take place in a solarpunk world or contain solarpunk elements, as well as older novels that helped inspire the genre. There are also numerous non-fiction works that relate to Solarpunk culture and applications in real life.

Alphabetical by Author. List originally compiled by u/dwarrowly on r/solarpunk

Garden by the Bay, Singapore

Still from Nausicaä of the Valley of the Wind 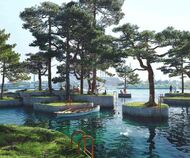 On the Track by Alex Le Guillou.

A collage of solarpunk cities.