Hope, harmony with nature, anarchy, Nature taking it back.

Soft Apocalypse is the concept of society collapsing slowly or post catastrophe. Usually characterized by the decline of technology, abandoned cities full of wildlife. The surviving humans would be focused on food, shelter, and having to work together as a community rather than fighting or having to deal with whichever world ending event may be occurring. Any technology they have might be solar, wind, or other renewable energy sources, but it will be limited.

The current political, economic, and ecological climate can inspire feelings of dread, meaninglessness and hatred for this world as it is right now. Soft Apocolypse draws of the desire to abandon this way of living, whether it was voluntary or not, in favour of letting the urban environment decay, leaving forests in its place. Using the feeling of collapse of today's society, the aesthetic focuses on the positivity of the world being a cleaner and almost happier place after the apocalypse. While it can still give a melacholy vibe, there is an underlying feeling of hope that permeates this aesthetic.

The visual features of soft apocalypse are very reliant on nature surrounded urban environments. These environments will often include concrete, brutalist architecture, skyscrapers, large buildings and subway stations. They're also very bland in appearance, in comparison to the bright moss, lichen or trees which surround the once urban area.

tumblr user otherwindow came up with a zombie apocalypse setting where the zombies were drawn to unhygeinic scents and became docile around pleasant ones, resulting in a focus in clean environments for the survivors, and adorning zombies and recently infected with flowers. Lots of focus on farming and growing feilds of flowers, possibly utilising wildflowers or weeds first.

External links to help get a better understanding of these aesthetics. 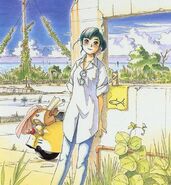 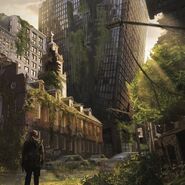 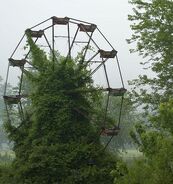