The idiom “snow bunny” started in the 1950s when it was first used to describe a woman on the slopes. Bunny was already being used as a word to describe a pretty woman and snow was added to signify the enjoyment of the woman spending a lot of time on slopes with snow. [1]

"SNOW BUNNY snow bunny. A female groupie who frequents ski resorts but spends less time on the slopes than in the lodge. IHAT: 1960. Source: RABBIT. The snow bunny is like the snowshoe hare, whose coat changes with seasons. In the winter the snow bunny dresses up in furs and hangs out at the ski lodge showing off, and looking for attention and alliances." - Robert Allen Palmatier[2]

There is a sexual element to the Snow Bunny, as many women dress this way to attract the wealthy men who frequent ski resorts.

Disclaimer: "By the 2000s, snow bunny began to refer to any attractive woman, regardless of whether or not they were in Aspen. In black slang, snow bunny specifically became a term for a white woman. Bunny, here, continues to draw on its long applications to women, while the color of snow is white. Snow bunny sometimes specifically refers to a mixed-race couple where a black man is with a white woman as well as white women who are attracted to black men."[3] 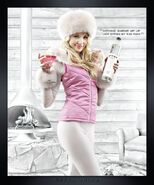