Sloanie, Sloane or Sloane Ranger is a stereotypical young upper-middle or upper class British person who pursues a distinctive fashionable lifestyle. Sometimes these people are referred to as "Posh" but it is important to note that not all posh people are Sloanes. Probably, the most famous example of this subculture was Diana Spencer, before and around the time she married Prince Charles. Another notable example is the TV character Tim Nice-But-Dim, an Old Ardinian.

The term is a humorous combination of "Sloane Square", a location in Chelsea, London, famed for the wealth of residents and frequenters, and the television character The Lone Ranger.[1]

During the British colonial era, British aristocrats settled in Australia, Canada, India and the United States. In the United States, they formed the WASP and Preppy subcultures, which can be very similar to the Sloane Ranger aesthetic.

In the 1920s, many of the old estates fell into disrepair due to rising costs and the decline of the servant class. Today many old estates are museums and historical sites. Other estates which remain in the family are rented out for movie and television productions, such as Highclare Castle, the setting for Downton Abbey. Despite the "poverty" of the aristocracy (relative to their ancestors), an old family name or title gives a Sloane status.

Part of the Sloane Ranger aesthetic is a sense of nostalgia for the past, whether it be the 18th century, or the 1920s-1950s. The nostalgia tends to be very patriotic, romanticizing British history and historical figures such as Winston Churchill and members of the Royal Family and ignoring the dark side of British imperialism.

Most of the things that Sloanes value are very old. They do not like or trust things which are new, foreign, or French.

Places and things associated with the English upper classes. There is some crossover with Dark and Light Academia aesthetics because many Sloanes attend boarding school and later prestigious universities such as Cambridge, Oxford, and St. Andrews.

Clothing is generally modest and long lasting. Royal Warrants can be issued to brands which produce high quality goods favored by the Queen, the Duke of Edinburgh, and the Prince of Wales. Warrants can be revoked if the actions of the company displeases the person who issued it. Rigby & Peller, which provided the Queen's undergarments, had its warrant revoked in 2018.

Natural fibers like cotton, wool, and silk are favored. The English insistence on maintaining their traditional dress codes, despite being impractical for the climate of India or the Caribbean, is often mocked in fiction.

Makeup is generally natural, with products used to enhance features. The Sloane Ranger handbook describes the look as "fresh scrubbed."

Members of the Royal Family are loyal to certain brands. Fashion blogs and magazines report on the styles worn by Kate Middleton and Meghan Markle, which have made them popular among the general public. Website crashes due to sudden interest in items are common.

Princess Diana in a Barbour jacket

DI Richard Poole from Death in Paradise who insists on wearing suits and drinking hot tea in the Caribbean.

Ben Whishaw in Brideshead Revisited. The Teddy Bear is preferred by Sloane children of all genders over dolls. 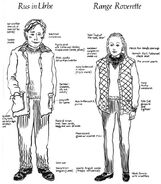 From The Sloane Ranger Handbook 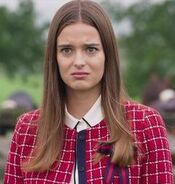 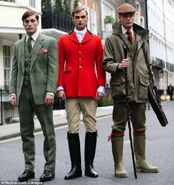 from left to right: suit for the country, fox hunting attire, shooting attire 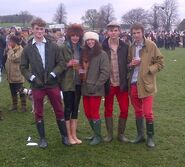 Barbour jackets, red trousers, and wellies. (The fur hats are NOT Sloane) 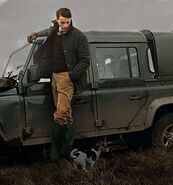 Deborah "Debo" Mitford, the youngest of the Mitford sisters with her chickens.