Sironuri (白塗り) which means 'painted in white' is a japanese form of make-up that is based on the traditional white face paint of geishas and stage actors. Popularised by Japanese artist Minori, shironuri became a makeup style used in japanese street fashion.

The make-up centers around wearing a white foundation and white powder that often also goes down the neck. Heavy black eyeliner is very common as well as decorative lashes. Dramatic eye makeup with painted designs, beads, sequins, petals and other decorative elements are also often used. The lips are often reshaped in extreme styles, ranging from small hearts, no lip-look, to stitched up mouth corners. Dark lipstick also works well to contrast the pale skin.

Popular fashions among the wearers of this make-up are Goth, Lolita, Mori Kei, Cult Party Kei and Angura Kei, but can also be. Usually the styles worn are very eye-catching with lots of layers and textures, with not a lot of skin showing. When skin is shown, however, white tights and gloves may be used to keep the white skin effect. Common motifs in these outfits are flowers, plants, and butterflies. For headwear, large headpieces and wigs can be used.

In 9th to 11th century Japan, Painted white faces were a status symbol. Later, in the 17th century, Geisha- female entertainers- adopted this trend as it made their faces stand out in the dim light.

The term 'Shironuri' was coined in around the 1960's as part of a style used by right wing nationalists , where they would wear school uniforms (gakuran and sailor fuku) and carry war flags.

Today, this style of shironuri still exists, but is more often used in a non political sense, and instead in a street fashion context. 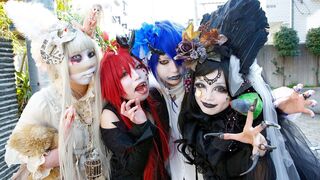 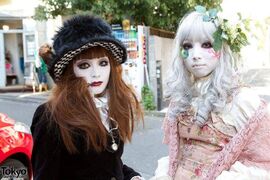 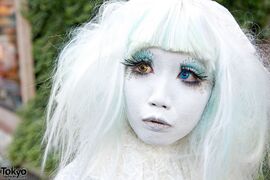 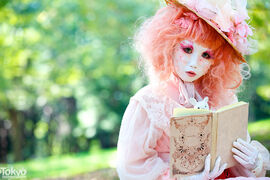 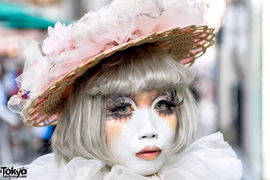