This is a work in progress.

Shibuya Punk is an aesthetic based on various media that surrounds inline-skating, graffiti, street gangs, or all of the following in an urban setting.

The style originated with a year 2000 Sega Dreamcast game known as Jet Set Radio (or Jet Grind Radio in some areas), which was praised for its distinct art direction at the time. The game follows the affairs of the Rudies, being roller-skating and graffiti-tagging gangs who proliferate the city of Tokyo-To, and to the Rudie gang known as the GG's. The GG's are the focus of the game, with their home turf in the Shibuya-Cho neighborhood of Tokyo-To, considered the coolest place to hangout, and along with fighting for turf dominance, reject the cliquey and exclusivity based memberships of other Rudie gangs such as the Love Shockers, Poison Jam, and the Noise Tanks, and jam out to the eclectic and groovin' pirate radio station aimed to turn Tokyo into one big dance party headed by DJ Professor K, Jet Set Radio. The game also has you attempting to run away from the police and its eccentric captain, Captain Onishima, from time to time, and eventually scales up to facing off against the Rokkaku Group, an iron fisted megaconglomorate bent on taking control over Tokyo-To's culture and youth expression.

The game immediately gained a cult-following, and would have its style, art and music inspire indie titles in recent times. These games include, but are not limited to; Lethal League and Blaze, Hover, Bomb Rush Cyberfunk, No Straight Roads, Butterflies, and more. These games furthered the style that is known today as Shibuya Punk.

Another game that may have inspired the style is The World Ends With You. Much like JSR, the game is also is rather stylish, and involves characters combatting in an urban city. The game also has a notable artstyle and hip-hop and rock inspired music.

An anime known as Air Gear debuted in the 2000s, which also features roller-skating gangs.

Tying in with Japanese Turn of the Millennium graphic design and speculative cyberpunk, Shibuya Punk's namesake also stems from the real life Tokyo Metropolis ward of Shibuya. Long considered both a place of passingbys and youth culture, Tokyo residents consider Shibuya the "crossroads/heart of Tokyo", as it is considered the most socially interactive and trendsetting neighborhood in the city, being known to be where residents throughout Tokyo all over crossover and mingle on its bustling streets. Be it from merely traveling into the city's largest bus terminal in all of Tokyo, shopping in 109, Cadoi and Mark City, showing off one's styles in Harajuku, catching concerts at one of its many venues, or even grinding rail skateboarding in Udagawa and the Shibuya River at night, making waves in Shibuya eventually catches on everywhere else, big or small, and if not, helps add to Shibuya itself.

In late 2000's the style was replaced by Superflat Pop. It has simular motifs but is inspired by the work of Murakami.

Music for Shibuya-kei/Shibuya Punk is varied and unique. The most notable genre is "Naganuma-kei", a term coined by Sashko Naganuma (check video description). This a term to describe a type of music made by famous video-game music composer Hideki Naganuma and fans of him. Naganuma-kei is a upbeat, catchy genre that takes inspiration from hip-hop, downtempo, drum n' bass, jungle, big beat, chiptune, and other 90s and Y2K-styled music.

Underground and lesser-known alternative music are key staples of Shibuya Punk in general. 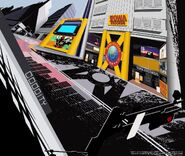