Sandalpunk a subgenre of punk that is set in an alternate universe in which civilizations during the Ancient era have access to advanced fantastic Bronze-Age or Iron-Age technology. This would potentially lead to a less-isolated retro-futurist Greece that was never conquered or a retro-futurist Roman Empire that never fell. Prime examples would be the mechanical wonders in films like Jason and the Argonauts (1963) and Clash of the Titans (1981) or the God of War video game series. High-technology in such works is rare (usually a "one-off" by a genius philosopher or a hand-crafted "trade secret" product made by workshops of artificiers) but potentially indistinguishable from miracles or magic. Another example is the retro-futuristic blend of Imperial Rome and 1930s Fascist Italy in Julie Taymor's Titus (1999). There are motor vehicles, radios, and simple firearms, but war is still waged by armor-clad troops with swords and spears. 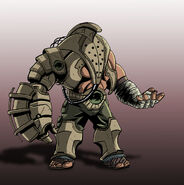