Even though there isn't any historical evidence of there being a type of clothing for Rogues, there are often stereotypes that come from popular media:

Roguecore uses visuals a lot like the other Royalcore sub-aesthetics, but it focus on thieves, assassins, and darkness. Here is a short list of Roguecore visuals: 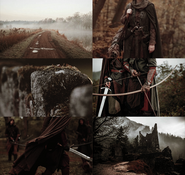