Robotics kids are the high school aged people who compete in a program called First Robotics Competition or something similar. Robotics kids usually flock together with other robotics kids as normal humans view their obsession with any and all things robotics annoying at times. Most dedicate themselves to robotics to the point of physical detriment and when warned of the consequences will defend these actions with the phrase "but its build season".

There are many meme pages specifically for robotics kids to appeal to the warped sense of humor they have obtained through years or robotics. All true robotics kids share a unique obsession with Woodie Flowers or Dean Kamen. Robotics kids view the freshman in the group as the underlings or robotics children until they can be raised into the subdivision of their choosing (mechanical, electrical, drive team, marketing, programming, etc) and lovingly roast them at every opportunity. Robotics kids share the values of Gracious Professionalism and all aspire for the day their team can win the coveted Blue Banner.

Includes the kids who assemble the chassis, and fabricate parts for the bot. They usually have at least 3 different tools on them at a time and carry the belief that everything that goes wrong is due to programming errors. Can and will attack when provoked.

Includes the kids who wire up the robot. They mostly deal with the electronics board and wire management. Mainly neutral with other subdivisions through will attack when wires are unplugged or CAN is messed with.

Includes the programmers of the group. They mostly deal with programming the robots many functions and spend many hours day hunched over designated Programming Computer. For your own safety, do not touch Programming Computer unless invited to do so. Carry the belief that everything that goes wrong is due to mechanical error (a rivalry and old as time).

Includes the kids who raise the funds for the team and coordinate outreach events. Are generally looked down upon by other subdivisions due to their nature of not working on the robot. The usually run the social media accounts. These are the safest to communicate with during Build Season though approach with caution during pre and post season.

Made up of a mix of kids from other subdivisions, these are the kids responsible for driving the robot during competition. Includes a technician, drive coach, human player, and two drivers. Typically this is made up of upperclassmen or those with team experience.

Usually one person or "Safety Captain", these kids are the voice of reason when it comes to safety on the team. Usually they are ignored. Will use duct tape as a method of fist aid. Aggressively safe.

This group of individuals are usually overlooked by other sub teams. Sub team members tend to be pushed to the side, and given "THOSE computers" (you know the ones I'm talking about) to do their.. "stuff" that makes the robot and team branding look swick (sweet and sick mixed into one). The group is made up of those arty kids that want to be apart of the robotics team, but hate actually working on the robot, hence why many members of the team overlook the sub team. If it wasn't for them, the robot wouldn't even look good. The group also works alongside the Buisness sub team. They tend to be one of the more "chill" sub teams during the rush of "build season"... usually...

Robotics Kids have a very small fashion, which usually consists of: 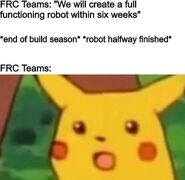