For the women who embraced this lifestyle to an excess, see Flapper. For the art and architecture movement associated with the era, see Art Deco. This article shall discuss the decade of the 1920s in the Western world in general, as well as its stereotypes in contemporary culture.

The Roaring 20s is the given name to the decade of the 1920s in Western culture. After the end of WWI, the United States and subsequent Western nations experienced an extremely successful period of economic, cultural, and technological growth and innovation. These new changes became associated with a decadent sort of excitement, as traditional practices were replaced by modernity. In the modern era, the Roaring 20s are appreciated for this wildness as the literature, music, fashion, and art of the time period is distinctive and carries across the zeitgeist.

The Roaring Twenties, sometimes stylized as the Roarin' 20s, refers to the decade of the 1920s in Western society and Western culture. It was a period of economic prosperity with a distinctive cultural edge in the United States and Europe, particularly in major cities such as Berlin,Chicago, London, Los Angeles, New York City,Paris,and Sydney. In France, the decade was known as the années folles ("crazy years"), emphasizing the era's social, artistic and cultural dynamism. Jazz blossomed, the flapper redefined the modern look for British and American women, and Art Deco peaked.

The Roaring 20s saw the emergence of new technologies to the middle class due to mass production. For this reason, the radio and automobile are prominent in the images of the 1920s middle class home. It also differentiates this era from many of the past, increasing its uniqueness. These two devices are also important to the aesthetic because cars had a great importance in the novel The Great Gatsby, and radios played music, one of the most distinctive motifs of the time period.

The art and architecture of the 1920s is typically associated with Art Deco, which utilized strong geometric forms, bold colors, exotic inspiration, and fine craftsmanship. Please see that page for more.

The fashion of the 1920s was greatly different from the fashion previous to this decade due to the fact that women's fashions were now looser, had shorter hemlines, and revealed more of the arms and legs.

The Roaring 20s saw the creation and popularization of Jazz music. 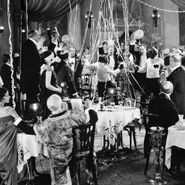