The formal Regency era lasted from 1811 to 1820 AD, but the period from 1795 to 1837 AD is also sometimes regarded as part of the Regency era. Technically the term Regency refers to a time period in British history, but it is commonly applied to the same time period in other countries, such as France, Russia, and the United States, because of the wide reach of the aesthetic. In the US, this time period is sometimes referred to as the Federalist Era.

The fashion and artistic design of the Regency era was heavily influenced by archeological finds. Ancient Greek clothing influenced women's fashion and design motifs from pottery and furniture were copied.

The Regency aesthetic experienced a revival in the early 1900s due to Kate Greenaway's illustrations in children's books, and much later in 2021 with the release of the Bridgerton Netflix series.

Regency visuals are often focused on elegance and grace.

Traditional regency dresses are characterized by loose, gauzy skirts and an empire silhouette. They normally tend to be in pastels. Accessories include gloves, necklaces, bonnets, shawls/wraps, headpieces, parasols, and fans.

The Regency era is a popular setting for historical romance novels. 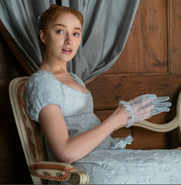