ABZU, liquid drum and bass
Reefwave is essentially a different way of viewing Nautical; instead of focusing what the ocean is like from on land, collecting shells and walking on the beach, Reefwave focuses more on the ocean itself - in particular, though not exclusively, on the way water and waves affect the way light falls underwater. Reefwave's primary colors are various shades of blue and green, ranging out to yellow or purple in some examples. Its imagery depicts coral reefs, sea life, aquariums and nature.

Because much of Reefwave centers around the way light behaves, its aesthetics pop up often in video games, where refraction is a fairly common way to display the power of a game's graphics engine.

Music that could be considered "Reefwave" includes:

Films that could be considered "Reefwave" includes:

Games that incorporate elements of Reefwave include:

A screenshot from the game ABZU. 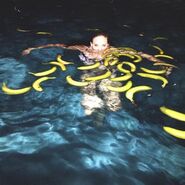 A woman with bananas floating around her.

Welcome to my offish.

A royalty-free photo of a ray.

A mangrove forest doesn't exactly fit the reefwave aesthetic, but it has a very similar energy.

A demonstration of the SEUS PTGI Minecraft shader pack.

From the music video of "Pools," a song by the band Glass Animals.

A woman's hair dyed in a blue through green gradient.
Community content is available under CC-BY-SA unless otherwise noted.
Advertisement