Repo Man, Sid and Nancy, The Young Ones

Punk is an aesthetic and subculture centered around the punk rock movement of 1970s that followed in the footsteps of the Hippie movement. While the Hippies were more about peace, love, and harmony; the Punks were loud, abrasive, acerbic, and went out of their way to do whatever they could to offend members of the status quo. Many preached for anarchism, far-left politics (Punk in the UK was a direct reaction to the Margaret Thatcher-era of politics at the time, which was hardline right-wing, after all), and spitting in the face of the Establishment by rejecting the prevailing capitalist philosophy of the time.

Punk has evolved over time to be a symbol of rebellion, whether small-scale (teenager vs parents) or large-scale (pro-anarchism, etc). Not all variants of punk are visually similar to the original 1970s American Punk (such as Steampunk), but contain similar messages about the potential for society’s decline. Aesthetics with the ‘-punk’ suffix generally share an attitude of defiance and/or rejection of mainstream society and, but there are some which are completely unrelated.

On the other hand, some people enjoy the visual aspect of 1970s original punk, and reject the philosophy, but most actual punks would refer to these people as posers. A popular example of this is the 1998 film SLC Punk!, which specifically made fun of people who wore the fashion, but didn't adhere to the philosophy, with main character. Stevo (played by Matthew Lillard), famously saying towards the beginning of the film:

Posers were people who looked like punks but they did it for fashion. And they were fools, they'd say "anarchy in the UK." What the fuck's that? Anarchy in the UK. What good is that to those of us in Utah, America? It was a Sex Pistols thing. They were British, they were allowed to go on about Anarchy in the UK. You don't live your life by lyrics.

Punk fashion is typically very different from what is seen on other subcultures. Clothing, hairstyles, cosmetics/jewelry, and even body modifications have their own style unique to punk. Punk fashion draws inspiration from other subcultures such as skinheads, greasers, and glam rock, and has influenced many other aesthetics, such as Grunge and Indie Rock. While a lot of punk fashion featured tartan plaid pants, band shirts, leather jackets, Mohawks, and multi-colored hair, but the key element of Punk was the anti-consumerist ideology (something that the Grunge aesthetic inherited from them in the 90s) of wearing clothes either bought at thrift stores or handed down from older family members and modifying it.

Mohawks, spiked hair, or shaved hair is popular within punk, alongside bright colours. Combat boots and high-top sneakers are popular choices of footwear, and Lace Code was at one point popular, but is now mostly unused. Leather and denim jackets and vests are common to see, and are often inundated with political messages, patches and band logos.

Although largely defunct now, beginning in the 1980s in Southern California, Lace code had begun to be used by the punk community to describe people's views on race, and soon other political and social ideologies. Laces were tied in a lace-ladder pattern, and the lace's colors on combat boots and Doc Martens were used to express social/political ideologies within the punk community. Their meanings:

Punk rock (or "punk") is a rock music genre that emerged in the mid-1970s in the United States, United Kingdom, and Australia. Rooted in 1960s garage rock and other forms of what is now known as "proto-punk" music, punk rock bands rejected perceived excesses of mainstream 1970s rock. They typically produced short, fast-paced songs with hard-edged melodies and singing styles, stripped-down instrumentation, and often political, anti-establishment lyrics. Punk embraces a DIY ethic; many bands self-produce recordings and distribute them through independent record labels.

The term "punk rock" was first used by American rock critics in the early 1970s to describe 1960s garage bands and subsequent acts understood to be their stylistic inheritors. When the movement now bearing the name developed between 1974-1976, acts such as Television, Patti Smith, and the Ramones in New York City, the Sex Pistols, the Clash, and the Damned in London, and the Saints in Brisbane formed its vanguard. As 1977 approached, punk became a major cultural phenomenon in the UK. It spawned a punk subculture expressing youthful rebellion through distinctive styles of clothing and adornment (such as deliberately offensive T-shirts, leather jackets, studded or spiked bands and jewelry, safety pins, and bondage and S&M clothes) and a variety of anti-authoritarian ideologies.

Hardcore is a punk genre that is faster and more aggressive than regular punk rock. Hardcore evokes a harsh vibe, with instruments amped up to high volumes and played with a speedy aggression. Lyrics were generally politically charged, and therefore too controversial to air on mainstream media. Hardcore would aim to be very anti-commercial and anti-mainstream. As a result, hardcore is highly influential on a lot of genres, with the most notable being post-hardcore (and everything related to it).

It’s also the origin of the “core” suffix now used by the Internet for aesthetic delineation.

Some genres born from hardcore include:

Horror punk is a genre that takes punk, and adds a dash of proto-gothic morbidity to it. Horror punk themes include monster-based stories and sci-fi metaphors. Because of its themes, it often overlaps (and may even be mistaken for) with Deathrock. Another genre similar to horror punk is Psychobilly, which is horror punk mixed with rockabilly (the most famous example being The Cramps). Horror punk bands include The Cramps, The Misfits, and (to a lesser degree) T.S.O.L.

Pop Punk is a fusion genre that takes the fast tempo and guitars of punk, with the melodies and chord progression of pop. Due to its mainstream and commercial nature, pop punk is a controversial genre within the punk scene, and entire bands are discredited if they are associated with the genre. However, its often ignored how pop-punk was with punk from the start - Buzzcocks are the most notable example. Also, looking at classic punk bands - some of them do have major pop leanings - like Ramones and Sex Pistols. Fusion with hardcore in the 80s - with such bands as Descendents - paved the way for the 90s pop-punk bands and their MTV popularity - like Green Day and NOFX. Since 90s, most pop-punk bands are being criticized for signing to major labels and "selling out" by making mainstream version of punk rock and MTV music videos.

Post-punk is a genre that formed that averts the standard punk sound. Instead of being fast and aggressive, post-punk has a more muted guitar, prominent bass and a steady drumbeat. Post-punk singers are also more melancholic rather than energetic. Post-punk bands include Joy Division, Wire and Public Image Ltd.

Riot Grrrl is punk, but through a more feminist lens. What originally started with zines calling for women to be allowed into punk spaces, Riot grrrl turned into a revolutionary music movement of its own in the 90s. Despite proclaiming to be progressive, many females still felt the punk scene was predominantly male. Therefore, the goal of riot grrrl was to allow female punks to be heard, and have a space of their own. Riot grrrl bands include Bikini Kill and Bratmobile, all the way to Sleater-Kinney. Riot grrrl bands often address feminist issues in songs, such as sexual-assault, rape, beauty expectations, image issues, and more.

Ska Punk is another fusion genre between punk, with the Jamaican-born genre ska. In late 70s, a new wave of ska was born - nowadays called 2 Tone. It reached it highest point of mainstream in the 90s as being more influenced by hardcore - the originating bands are Operation Ivy and Mighty Might BossTones - and more famous are - No Doubt, Rancid, Reel Big Fish and Less Than Jake. More Recent bands include NOFX, The Decendents.

Taqwacore is a subgenre of punk music dealing with Islam beliefs, its culture, and its interpretation. The scene is composed mainly of young Muslim artists living in the US and other Western countries, many of whom openly reject traditionalist interpretations of Islam, and thus live their lifestyle within the religion or without.

While the name Taqwacore was coined by Michael Muhammad Knight in his 2003 novel The Taqwacores, Taqwacore has roots in Muslim punk music from the 1990s.

Bands in Taqwacore include The Kominas, Secret Trial Five, and Al Thawra.

Despite being somewhat varied in political and social beliefs, punk political identity consists primarily of individual freedom and anti-establishment beliefs. Punk also largely follows Do It Yourself / DIY ideals, in rejection of corporate ownership of the music scene. Many use second-hand equipment, and/or clothing, as a statement against consumerist ideologies. Some participate in direct action in both peaceful, and more violent means of achieving goals; protest, rioting, eco-sabotage, squatting, legal and illegal graffiti, boycotting, vandalism,  and other methods are used to express their ideologies. Punk also promotes concepts like gender equality, racial equality, health rights, civil rights, animal rights, disability rights, and LGBT+ rights. Overall, punk ideologies are mainly leftist, and anti-capitalist, with focuses on equality.

Frequently it can be found that punk subculture is opposed to "Selling Out", meaning abandoning social values, musical style, or political ideology in order to gain status, wealth or power.

Punk has grown over time and its ideologies have expanded in variety, and now it is more common than before to find punks that follow and/or fight for concepts such as Animal Rights / Veganism, Apoliticism, Socialism, Straight Edge and Liberalism.

Certain groups and individuals identify as part of punk subculture while holding fascist, racist or neo-nazi views. This, alongside some other groups such as Conservative punks, is seen by almost all of punk subculture as opposed to punk's history and ethos, and there is an active push to reject it from punk subculture altogether. This can be seen time and time again, for example Green Day's anti-racist and anti-fascist messages during the 2016 American Music Awards, and the Dead Kennedys song "Nazi Punks Fuck Off". 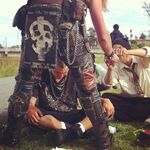 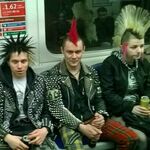 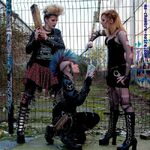 A battle jacket, which are common in the punk scene.