Note: This article is not mocking the LGBTQ community or calling the people in the community an aesthetic, it is here to talk about Pride flag history and how they fit into moodboards and visuals of aesthetics.

Colors of the corresponding pride flag
Pride flags are a diverse set of flags that are used for representing and celebrating a gender or sexual identity that is fully part of the LGBTQ community. When it comes to the aesthetic of Pride flags, they are very commonly used in the moodboard and stimboard communities on Tumblr, but also used by corporations in pride month.

The first pride flag was made in 1978 by Gilbert Baker, an openly gay activist. It was the rainbow flag, although different than how we know it today: it had 8 colors instead of 6. Baker removed the pink stripe due to fabric unavailability. Later, organizers of the San Francisco Pride parade wanted to split the flag into two in order to decorate the two sides of the parade route, but they needed an even number for that, and so they removed the turquoise stripe from the flag.

In the years after, many pride flags have been added to celebrate different parts of the LGBTQ community, and to this day, new pride flags are being created.

In June 2015, the Rainbow flag was added to the design collection of The Museum of Modern Art.

Rainbow flag as we now know it today

Gender and sexual orientation are often an important part of one's identity. This is why online, you see moodboards, stimboards, drawings, outfits, and more, with the color palette of a pride flag. It is mainly for celebration and/or self-acceptance. You can find many moodboards on Tumblr to see more pride-based moodboards. 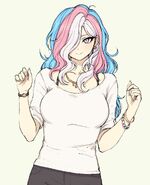 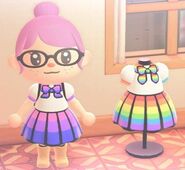 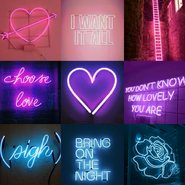 Icecream with pansexual flag palette by lullychi on Tumblr 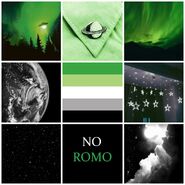 Space moodboard with aromantic flag palette by moodboard-hyx on Tumblr

Online, pride flags are seen all year round, but in real life, you see them mainly in pride month (and only in accepting countries). Most pride events happen around June every year, to commemorate the Stonewall Riots that happened at the end of June in 1969. The Stonewall Riots were an important event for the LGBT community, as this was a turning point against LGBTQ oppression.

The first pride parade was in 1970: it was a quiet march, much unlike pride parades today. The general public was also not supportive and one of the organisers even received death threats. Luckily, more and more cities organized pride parades in the years after, and support for the LGBTQ community has grown a lot in the last 50 years, even though there is still a long way to go.

In the 2010s, corporations also decided to show support for the LGBTQ community, by giving their logo a rainbow overlay and selling items with the rainbow flag and with supportive slogans. From 2020, other versions of pride flags became more common, such as the transgender flag, the bisexual flag, the non-binary flag and the rainbow flag with an extra black and brown stripe.

However, it is important to note that this received a lot of criticism. Some say corporations are only in it for the money (even if they donate to LGBTQ causes) and some call it 'slacktivism' - showing support with the main purpose of boosting the egos of participants in the movement. Corporations are not contributing to fixing problems for the LGBT community (for example, 40% of homeless youth are LGBTQ, and even charities often only talk about this during pride month) and are choosing the easy way out by commercializing the rainbow flag and by that, overshadowing the less-pleasant and less-talked-about LGBTQ issues that matter, some argue.

One of the first gay pride parades

Pride in the current years

An eye colored with the pride-flag colors