Shades of blue, white and teal

Poolcore is an aesthetic which consists of images of pools which give off an eerie or peaceful feeling or vibe. Often, these images are simply photographs of real pools, or pool water, but they are also frequently 3d renders or art. Poolcore was born from the internet and similar aesthetics, such as liminal spaces, so the images are often familiar, or seem as if you've seen them before.

Poolcore can have several different vibes, with some pools giving off more of a cleancore vibe, whilst others will be more nostalgic or liminal in appearance. Despite having the ability to be inspired by other aesthetics or appear similar, poolcore has many defining features including tiles, water, blue colours and the patterns the water in the pool lets off.

Poolcore can suggest feelings of eeriness and serenity or peacefulness. The way that poolcore makes you feel is a slight mix of two very separate things, seeings as the feelings of liminality insinuate creepy or eerie feelings of being to place before, or seeing the pools in a dream. Dreams are often a thing which incorporate water, so as such, a lot of people will find that they've seen similar (or exact) places like the pools in their own dreams. The peaceful feeling is driven by the clean tiles or the blue and white colours which are a part of the images along with the clear water which can strike one as being serene, hence the feelings of serenity. The nostalgic feeling often associated with poolcore is one based in logic, as many people went to pools as children, or have been to many in their life. Pools often look fairly similar, so the liminality and nostalgia make sense as the pools one has been to all feel like they cross over as a whole in poolcore images.

Poolcore visuals are generally very blue in appearance, although not always the case, and often have tiles which are commonly white and square-shaped. Other times the tiles in poolcore are darker shade, such as navy or lighter blue colours. In 3d renders, the tiles are most often up the sides of the walls as well as under the water, but since actual pools don't generally look like that, real pool photographs will almost never have their tiles all the way around, and just have them inside of the pool.

The pool water or light going through the water is a big part of poolcore, and the way that the light hits the water is often a prominent visual feature. Along with this, the pattern of the water is sometimes the main feature of an image, and some poolcore photos will just show the water's light reflections on the bottom of the pool, or the top of the water. Since these types of poolcore images will mostly be close-ups, the tiles are often a large part of the whole image.

Some poolcore images tie in very closely with nostalgiacore or kidcore, and as such will have more colourful aspects along with the other basic elements of poolcore. These pools originally aimed more at children will often have water slides, or water playgrounds in the pool, and will often give off a different type of nostalgia than the less colourful pools.

Jared Pike is an artist who creates 3d renders of aesthetic pools which include white tiles, and water in pool rooms.

Another one of Jared Pike's dream pool 3d renders 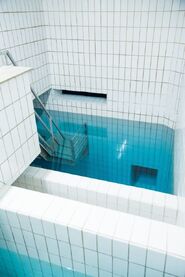 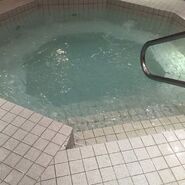 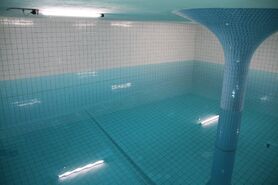 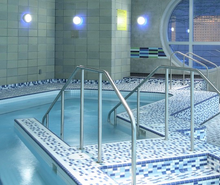 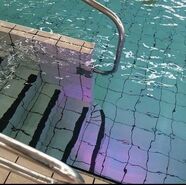 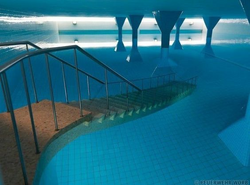 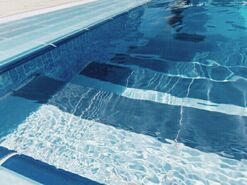 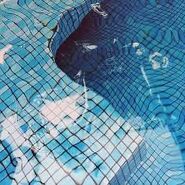 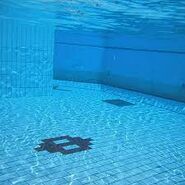 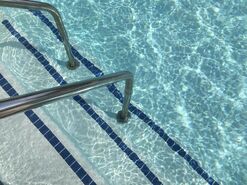 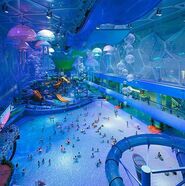 This image was taken at the Beijing National Aquatics Center 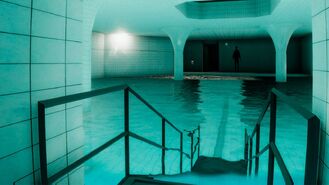