mid 2000s
Pokemón is the name of a subculture among Chile's youth that surfaced in the mid-2000s and began to decline in late 2009. By 2012, it was considered extinct. They were readily identifiable by their angular and pressed hairstyles, reminiscent of characters from the Japanese media franchise Pokémon. It was one of the largest and better known urban tribes in the country.

Pokemones dressed similarly to other urban tribes, such as otaku and emo, the pokemones is the fusion of otakus and flaites but they were not followers of anime like the former, nor shared the musical tastes of the latter. Apart from borrowing aspects from the emo, like the sideswept bangs, the Pokemones also shared some aspects typical to the punk and the local "hardcore" subculture. Pokemones were livelier, more extroverted than the emo and otaku stereotypes. 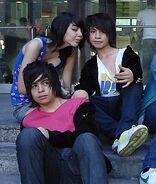 Add a photo to this gallery
Retrieved from "https://aesthetics.fandom.com/wiki/Pokemón?oldid=42778"
Community content is available under CC-BY-SA unless otherwise noted.