Pixiecore is an aesthetic that is derived from a blend of Fairycore and Goblincore. Pixiecore is similar to both, but unlike Fairycore, fashion usually involves more tunics and t-shirts and not as many pastels. And unlike Goblincore, it does not involve "dirty" things such as insects and dirt. Pixiecore is very loving of nature, but focuses more on indoor gardening such as succulents, cacti and terrariums.

In folklore, pixies love to play in water, and as such, pixiecore also focuses on things such as bathing in baths filled with things such as bubbles, soap petals and bath bombs.

Similar to Crowcore and Goblincore, Pixiecore involves the culture of collecting things from the floor and keeping them.

Pixiecore also focuses on rainbow tones, anything holographic, iridescent, or rainbow coloured can be involved in the aesthetic.

The Pixiecore aesthetic can include:

Pixiecore fashion is all about comfort. Typically, legs aren't exposed fully and are covered with either leggings, harem trousers, jeans or knee-length shorts. Tops include tunics and t-shirts, and sometimes knee-length or above dresses. (Though they always have leggings underneath.) Shoes are generally flat and comfortable, such as crocs, trainers, slip-on-shoes and ugg-style boots. A lot of pixiecore fashion is thrifted as this is more sustainable.

Patterns are a big part of Pixiecore, and most outfits consist with clashing patterns and lots of colour. This can include mixing and matching florals, pairing colourful shoes with tie dye shirts or even wearing floral trousers with a floral shirt. Sometimes, this can create the appearance of pajama fashion. 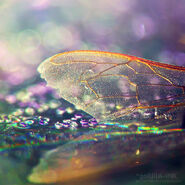 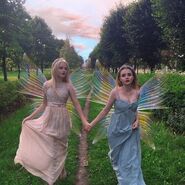 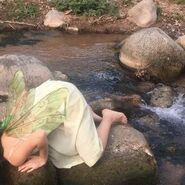