Piratecore is an aesthetic based around the themes of pirates, a person who attacks and robs ships at sea. It usually involves boats, the sea, and treasure rather than actual crime. It draws its inspiration from aesthetics such as Adventurecore and Crowcore, and may include things such as: collecting shells/rocks/trinkets/bones/etc, studying maps and constellations, sea travel, and sketching. Some may even take pride in their weaponry, mainly consisting of swords and daggers.

People valuing Pirate aesthetics either have strong aspirations to travel the oceans, or ties to beachside mountains and/or homes.

The aesthetic does get slight criticism due to the bad reputation of pirates in history. Though, the aesthetic itself does not value stealing and thieving, nor does it mean to present colonialism. The community around this aesthetic instead value freedom, fairness, curiosity and balance. Loyalty is a large factor in Pirate, and a moral code is usually presented. They are interested in the unknown and the mysteries of the ocean, and believe in hard work and a strength of heart and mind.

Similar to Cottagecore, Dark Academia, and Adventurecore with some aspects of styles considered 'hippie' or 'boho'.

Accessories can vary but are usually scarves, beads, chains and handmade jewellery, and unlike the neutral colors of the clothing, will range from bright colours to metallics.

A lot of pirate-esque music are modern shanties or maritime-based folk.

Movies/Series with visuals of oceans, boats, treasure or sea myths:

Books that invoke the pirate aesthetic: 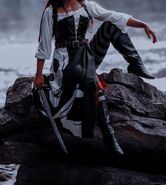