Old Hollywood is an aesthetic surrounding the movies, music, and fashion popular from the 1930's to the 1960's. It's meant to draw you into a time before and forget about the current things happening, back into a time where everything felt simpler.

The Old Hollywood period was the beginning of the Sound Era: when silent movies faded out of the spotlight as the industry transitioned to sound-film production. The beginning of the Sound Era isn't exactly set in concrete. Some think of it as when the movie The Jazz Singer was released in 1927, which was the first full movie with synchronized dialogue, while some see it as 1929, the official end of the Silent Era.

Old Hollywood movies adhered to strict set of genres: Western, comedic, musical, and biography, sometimes multiple at once. The movies have linear timelines that leave no room for speculation, except when a character has a flashback, and the problems are always solved at the end (one of the reasons people are drawn to this aesthetic).

Fashion from the old Hollywood days include:

Makeup was minimal but bold, dark lips and thin eyebrows were popular.

You can get pieces like these from vintage/thrift stores, there are also lots of sewing patterns on Etsy.

There are also many later movies, set in or pay homage to the era: 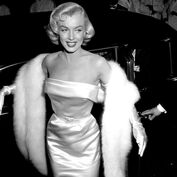