This is a sensitive topic. Many would argue that buying into this aesthetic and subculture is not far from romanticize of pedophilia. Please research the implications of this style thoroughly before making the decision to involve yourself in it. If this makes you uncomfortable but you do like the look, you can still be a part of the Nymphet community and frown upon people in the community who do romanticize pedophilia.

It's still necessary to acknowledge even harmful influences on modern visual culture, but we at the Aesthetics Wiki DO NOT condone the romanticization of pedophilia and child abuse.

Nymphet is an aesthetic based on a novel written by Vladimir Nabokov - "Lolita", published in 1955 and its movie adaptations from 1962 and 1997. Nymphet is an illusion created in the mind of Humbert Humbert, the (unreliable) main character and narrator of both the films and book. For the term, it is used by Humbert as a way to justify his predatory actions towards Dolores Haze, his victim. As an aesthetic, this word refers to the style of Dolores Haze in the movies, that influences the fashion nowadays. It mostly revolves around youth, summer dresses, and carefree fun.

Lolita by Vladimir Nabokov was published in 1955 to much controversy; some publications demeaned it and the novel was banned in multiple countries. The book's status as a classic required different publishers to find new ways of conveying the premise of the novel. Shari L. Savage's Lolita: Genealogy of a Cover Girl, an examination of book cover design, lists the common visuals that the designers use, the vast majority of which overlap with visuals that nymphet aesthetic bloggers reblog today.

In 1962, Stanley Kubrick adapted the book for film. On the film poster are the two most iconic symbols of the character to this day: heart-shaped sunglasses and a red lollipop.

The 1997 adaptation by Adrian Lyne provided inspiration for most, if not all, fashion points. Milkmaid braids, sailor collars, retro swimsuits, and the color palette are all clear connections between the modern nymphet community's fashion style and the film.

The work that arguably introduced young women to the archetype and aesthetic of Nymphet was Lana del Rey's album Born to Die (2012). She references Nabokov's prose, having sex with older men, visuals from the films, being sexually attractive at a young age, and having a party lifestyle[1].

In the same year was the release of Marina and the Diamonds' Electra Heart, which explores feminine archetypes, sexuality, teenage girlhood, and the carefree yet vulnerable personality type of nymphet aesthetics.[2] These two albums being released at around the same time made the two artists' listeners aware of, and yearn for, this sort of persona.

Tumblr was the de facto website for this subculture to gather.

Nymphet visuals focus heavily on adolescence and the gateway between childhood and adulthood.

The most prominent visuals are the ones associated with the film and cover art of the books: the heart-shaped sunglasses and red lollipop.

Cherries, specifically maraschino cherries, are one of the most iconic images associated with the nymphet aesthetic due to their connotations with innocent femininity, nostalgia, and sexuality. Its symbolic meaning can be traced back to 17th century literature, and its use in American pop music, slang, and party tricks (tying a knot in the mouth) cemented it as representative of adolescent sexuality.[3]

Note: This fashion should not be confused with Lolita fashion, a Japanese street fashion that is heavily inspired by Rococo and Victorian era clothing, which has entirely different rules and mentality behind it, and is no way related to Nabokov's "Lolita", despite sharing its name.

Common patterns involved in this aesthetic are gingham, plaid, cherry print, and swiss dot. Their associations with vintage fashion and schoolgirl life is explained in the visuals section.

Faunlet is the male equivalent to a Nymphet. The main inspirations for the aesthetic are Tadzio from the 1971 adaptation of Death in Venice, Leonardo DiCaprio and vintage boys clothes, especially sailor clothes and woodland themes and colours.

The Faunlet aesthetic does seem to have more of a following in the LGBTQ community than in heterosexual circles. Straight members of the Faunlet community do exist, though it's nowhere near as common.

Japanese Nymphet differs from the rest of the article because rather than it being a community and quasi-identity, the Nymphet aesthetic there is exclusively based on fashion that is based on the costume design of the two Lolita movies. 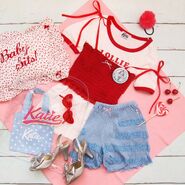 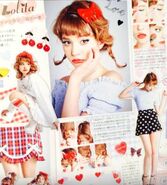 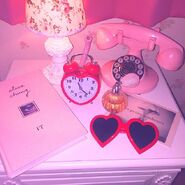