Neo-militarism, also known as neomilitarism, is a fictional aesthetic that appears in the videogame Cyberpunk 2077.

Neomilitarism is one of the four styles seen in Cyberpunk 2077. Neomilitarism is separated from the austerity of entropism by its sleek and domineering aesthetic. Its power dressing for the already powerful, and has an air of practical luxury.

Neomilitarism, our third style chronologically, adds a layer of deadly elegance and corporate, militaristic fashion to the stylistic mix of its predecessors. It is mostly encountered in the wealthier parts of the city, especially corporate zones and business districts. This style is epitomized by the catchphrase "substance over style", according to which products should be forceful, functional and high-quality rather than flashy. Neomilitarism's distinctive features are its cold, threatening elegance and formality, highlighted by the visible presence of militaristic accents.

The well-known entrepreneur Elon Musk commented on Twitter that the interiors of the videogame Cyberpunk 2077 were very beautiful and very well designed (especially, those of this aesthetic) and that he would take influence from neo-militarism for the aesthetics of his projects (like his colonies on Mars).

Also, the fashion brand Not Just a Label, created in 2021 a fashion collection inspired by this aesthetic (which you can see in the gallery). 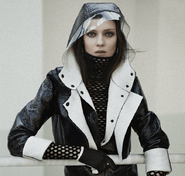