Obedience to your nation

These are by former members of the military and/or about military-related topics.

Military music typically includes marches and songs related to a country or its military, such as national anthems. However, music can have military themes without being explicitly related to a country. There's more to this than nationalism. For example, songs that focus on life in the military or war would fit this aesthetic.

Games that have the military aesthetic are primarily FPS (First-Person Shooters) or war simulators, but some strategy games are also related.

Revolution specifically focuses on the buildup to a revolution, typically one that involves the military. Nationalism and a desire for change are particularly important for this subgenre.

In terms of aesthetics, the Revolution subgenre generally consists of two main factions with contrasting factions; the rebels, or otherwise the party that is attempting to overthrow or usurp the power of the second faction; the government- or another entity with supreme authority, in some cases represented by a monolithic corporation or even a larger rebel group encompassing that of the protagonist.

The rebel faction will typically dress its 'soldiers' haphazardly and as such most of the rebels themselves will be wearing clothing and gear resembling that worn by civilians, with actual military equipment such as ammo pouches, webbing, helmets or field caps issued inconsistently amongst their ranks. In terms of appearances, rebels thus only vaguely, if at all, resemble foot soldiers of a contemporary military.

The rebels that appear in the 2008 rendition of 'Rambo' appear to demonstrate most of the aesthetic trends used by 'rebel' factions in media quite well. Of the column of rebels visible in the image shown above, none wear a distinctive military uniform- though some are equipped with magazine pouches visible across their torso, best seen on the soldiers with a yellow and blue bandana respectively in the centre-right of the image.

The lack of proper military uniform (and thus the rebels' close resemblance to their respective civilian population) in media is often used to implicitly reflect the rebel faction's values; which is typically, in most films, including but not limited to things like individualism, liberty, and equity for the people being oppressed or misrepresented by the regime they aim to dispose of.

However, not all rebel groups represented in film are shown as an ununiformed civilian force. Whenever rebel factions are given a uniform, such is usually done for the sake of military or historical accuracy, as most notable revolutionary armies in real life have typically used some sort of uniform to distinguish themselves from civilians in conventional battles. A common option is to simply give the rebel soldiers matching items such as an armband, piece of headgear, or patch with insignia of the rebel army on it. Such is shown once again in the 2008 'Rambo', in which one scene displays a rebel in a black outfit with the patch of the Karen National Liberation Army on their shoulder.

Surprisingly, the government faction of this subgenre has even more varied aesthetics between different pieces of media than that of their rebel counterparts. While the 'rebel' outfit is generally quite homogenous and can be reasonably generalized as civilian clothing with occasional pragmatic use of military equipment, the 'government' soldiers' outfit can vary massively depending on minute details of the media they are presented in.

If based in present, historical, or certain 'alternate reality' settings, the regime's army can be placed into one of two categories. The first and most common is when the film is set in a developing country that has been taken over by a dictatorship or other authoritarian regime, in which case the government's army- while still making use of standardized uniforms and equipment- will be notably underequipped with outdated weapons, vehicles and infantry gear that makes the individual soldier notably less effective in combat. Being specific, this usually means the soldiers may:

It is likely that the soldiers of the antagonizing government are given ineffective equipment to represent how they are effectively used as 'pawns' by a regime that ultimately does not care about them; reinforcing the anti-individualist ethos valued by the regime that is usually part of the inspiration for the rebellion they are fighting to suppress. The regime soldiers' matching uniforms that make them appear alike, when contrasted with the haphazard outfits of the rebels that differs with each fighter contributes to the main motif typically used in the Revolution subgenre; individualism and liberty vs authoritarian collectivism.

The second, less prevalent category is when the film is set in a developed (or at least wealthy) country where the government's army actually appears very modern in terms of equipment and discipline. However, this generally doesn't prevent them from falling into the 'Redshirt Army' trope as the former category does, and as such its soldiers are just as likely to be murdered en masse during the action scenes in spite of their seemingly better standing. The soldiers of this army can be characterized as the opposite to that of the former on all the points discussed above barring incompetence and discipline.

In media where the government's soldiers are given effective equipment, it can be inferred that such is done to make them appear like a much more threatening opponent to the rebellion, or may reflect the overwhelming authority enforced by the regime upon its people. This is all in spite of the trend of such armies proving extremely incompetent when in combat with the media's protagonists or their rebel counterpart, in which, as can be seen in the images provided, the soldiers do not appear to follow any sort of decentralized command structure (squads of soldiers separate from each other and lead by sergeants, etc.) However, it is entirely possible that this is done out of unintended ignorance of such command structures in real life, as opposed to an intention to portray the army in question as incompetent or disorganized.

After the War specifically focuses on the impact of war, particularly on members of the military. Disillusionment is a common theme.

An image of two soldiers crouched in a grassy field. 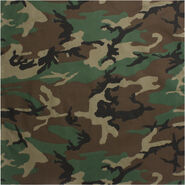 An example of formal dress.

Members of the Brazilian army in ceremonial uniform (left) and combat fatigues (right).

US MARINES HAVE A JOB TO DO. YOU CAN HELP BY ENLISTING TODAY. Source: https://catalog.archives.gov/id/515910

A Platoon of [African-American] Troops Surrounds a Farm House in a Town in France, as They Prepare to Eliminate a German Sniper Holding up an Advance, Omaha Beachhead, near Vierville-sur-Mer, France Source: https://catalog.archives.gov/id/531188