Midwest Gothic is a type of Regional Gothic aesthetic characterized by the portrayal of common facets of the Midwestern American lifestyle in a macabre light. Like many other Regional Gothic aesthetics, it originated and rose to popularity in the middle 2010s on Tumblr. Just to clarify however, This ain't Midwest life. The person who told you that lives in a studio apartment in a major city and wants to live the "pure life" without actually knowing what it is. The Midwest is city, town, forest, and cornfield, Expect Detroit, that place is Midwest Gothic in a city. All of this applies to cottagecore as well

Common themes found in Midwest Gothic works include the indifferent and mysterious qualities of nature, references to local folklore, exaggerations of Midwestern traditions, and a sense of isolation and disconnection, as well as poor weather and depressing lives. The aesthetic is often linked to cottagecore and liminal spaces.

Like its predecessor, Southern Gothic, Midwest Gothic flourishes mainly in literary works. Although most self-described literature in the genre is microfiction on Tumblr, there exists a significant body of literature by established authors that falls into the classification. Some authors known for their Midwest Gothic work include:

More specific books by authors that more often write outside the genre include:

Midwest Gothic can also be found represented in various high-profile films. As many of the tropes of Midwest Gothic can easily be transferred to the cinematic realm, several works have been described as being a part of the genre. These include: 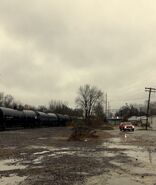 A landscape photograph in the genre.

An abandoned building in Indiana. 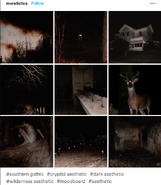