Midwest Emo is a sub-genre of emo music that began in the 1990s as a response to the Washington, D.C. emotional hardcore scene, such as Rites of Spring, Moss Icon, and Embrace. Key traits of the genre include emotional and unconventional vocal deliveries, personal and introspective lyrics, and “twinkly” arpeggiated guitar melodies. Bands such as Sunny Day Real Estate, Cap'n Jazz, Mineral, Braid, Christie Front Drive, and The Promise Ring introduced indie/math rock-inspired elements to the D.C. emo-core sound to polish its more abrasive components into a unique style that, while more accessible, maintained its introspective and expressive roots. A key difference between the scenes is that Midwest emo bands prioritized melodic riffs and vocal lines over the furious, punk sensibilities of the emo-core bands they succeeded.

Midwest emo experienced a slight rise in popularity within DIY movements across the United States throughout the 90s, with notable scenes in the Midwest (Cap’n Jazz, The Promise Ring, American Football, Braid), Texas (Mineral, At the Drive-In, The Gloria Record), the Pacific Northwest (Sunny Day Real Estate, Pedro the Lion), and the East Coast (Texas Is the Reason, Jawbreaker, Rainer Maria, The Jazz June, Penfold). Because of the notable stylistic changes of the emo genre over time, this period is often referred to as the second wave of emo. The low-budget, DIY roots of the genre heavily influence both the music and aesthetic of Midwest emo. This manifests in several ways: raw emotional delivery takes precedence over production quality, audiences formed through word-of mouth rather than label promotion, and fashion was decidedly uninspired, favoring comfort and accessibility over artistic expression—which was largely relegated to the music itself.

With the decline of grunge in the late 90s, the future of the alternative rock landscape was uncertain. Bands across the subgenera of alternative rock (such as pop-punk, nu-metal, and post-grunge) found themselves competing for label attention, and though Midwest emo acts such as Texas Is the Reason and The Get Up Kids received considerable exposure on MTV, it was unclear whether any of them could sign to a major record label and propel the Midwest sound into the mainstream. By the early 2000s, it became clear that labels favored more accessible, pop-influenced emo acts such as Fall Out Boy, My Chemical Romance, Taking Back Sunday, and Jimmy Eat World. These bands have been described as "mall emo," emo-pop, and, debatably, the third wave of emo. Following the massive commercial reach of these emo-pop bands and the continued success of pop-punk acts like Blink-182 and Green Day, it seemed that Midwest emo was all but forgotten.

Midweste emo experienced a resurgence in the early 2010s in a period which came to be known as the "Midwest emo revival," or the fourth wave of emo. Bands such as Algernon Cadwallader, Street Smart Cyclist, Snowing, Into It. Over It., Empire! Empire! (I Was A Lonely Estate), Everyone Everywhere, Brave Little Abacus, and CSTVT (formerly Castevet), Merchant Ships were greatly influenced by the Midwest emo acts of the 90s. Emo revival bands utilized "twinkly" math-rock-esque riffs even more often than their predecessors, and while relationship issues remained a common theme, revival acts also more often utilized surrealist imagery and lyrics, not unlike those written by Cap'n Jazz over a decade prior. Bands of the revival often used extended chords and brass instrumentation, which had previously been characteristic of bands like American Football, to further enhance the "jazzy" qualities of their songs.

The Midwest emo revival quickly diversified in the following years, with bands pulling influence from a broad swath of genera. Pop-punk and punk influence found their way into the revival on the backs of acts including Title Fight, Dikembe, Joyce Manor, The Hotelier, You Blew It!, Citizen, Glocca Morra, and Free Throw. Indie music also had considerable influence on the revival. Examples of bands that straddle the border of indie and emo include Tigers Jaw, Modern Baseball, Marietta, Sorority Noise, Microwave, and Foxing. Bands such as Brave Little Abacus and The World Is A Beautiful Place & I Am No Longer Afraid To Die fused Midwest emo with post-rock elements such as texture/timbre experimentation and the implementation of electronic instruments. Bands such as I Kill Giants, Tiny Moving Parts, This Town Needs Guns, and Colour wore their math rock influence on their sleeves.

Historically, midwest emo style has functioned similarly to norm-core fashion in that comfortable, conservative styles of dress are more common than outright experimentation. Midwest style is unfashionable and inoffensive by design.

Blue jeans and chinos are the most common bottoms within this style. Touring musicians will often wear khaki shorts or even basketball shorts to maximize comfort while traveling and performing. Plaid and tartan design shirts are Midwest emo essentials, and will typically be on flannel or madras cloth. These can be worn unbuttoned revealing a plain t-shirt or graphic tee, or buttoned, though rarely will they be tucked. Polo shirts in plain colors or patterns are often worn, and plain t-shirts essential, and are actually more likely to be tucked than button-down shirts. Hoodies and sweaters are especially common in the literal Midwest.

The most common accessories include headwear such as dad hats, beanies, and baseball caps. Glasses, if prescribed, are typically worn rather than contact lenses.

Sneakers and casual boots are the most common footwear options for this style. Converse, Vans, and New Balance sneakers in white or black are most often seen, though checkered vans and athletic shoes are not uncommon. Low-top and high-top variants are equally acceptable, and pants will often be cuffed. 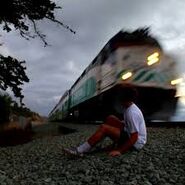