Aesthetics Wiki
Register
Don't have an account?
Sign In
Advertisement
in: Feminine, Oceans and islands, Visual,
and 15 more

Mermaids are fantasy creatures that are half human and half fish. They are prevalent in mythology and pop culture all over the world, the most popular modern depiction being of a beautiful woman with a fish tail. The male equivalent, a merman, are less common in media.

They are often associated with storms, shipwrecks, and drowning, however in other mythology they can be benelovent and give gifts or fall in love with humans.

The visuals of the mermaid aesthetic are mostly a blue, green, purple, or pearl color scheme. Textures will be smooth, shiny and iridescent, like fish scales. The focus of the mermaid aesthetic is the tail, the shape of the fins often being closer to that of a whale than a fish. Art of mermaids may choose a specific fish to copy the tail from, like koi, or shark, or even chose another sea creature like a seal.

Mermaid themed accessories and clothing was very popular in 2016, alongside the unicorn aesthetic. This was synonymous with branding using a blue, green, purple colour pallete in their products, such as drinks, food items, beauty products, and accessories. This colour pallete was also used in brightly dyed hair, often styled in 'beachy waves'.

Other mermaid clothing items includes leggings with scales on to mimic the appearance of a mermaids tail, occasionally with a flared leg to look like the fins. Tops made out of conch shells or to look like conch shells. Elaborate shell and crystal headdresses.

Mermaid makeup was popular for festival or costume makeup, a technique using fishnet tights was developed by makeup artists that involved using the tights as a stencil to powder iridescent blue or green onto the side of the face. This would then be accentuated by glitter, sequins or pearlescent beads.

The siren aesthetic tends to be a darker version of the mermaid aesthetic, as sirens are more associated with the mythology that they lure sailors to drown. Visuals in this aesthetic may focus more on making the merfolk look inhuman or scary, with bigger scales, claws, shark teeth, fisheyes, or any characteristic associated with deep sea creatures, like translucent skin. The colour scheme is dark blues, teals, black, and off whites. 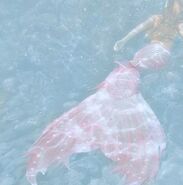 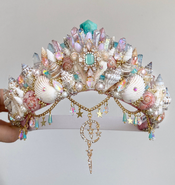 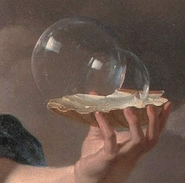 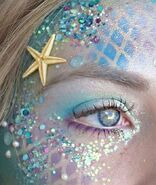 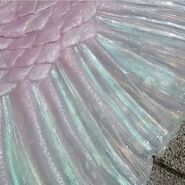 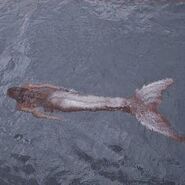 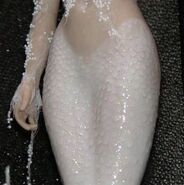 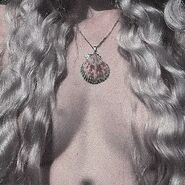 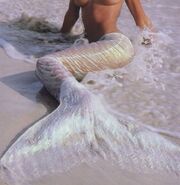 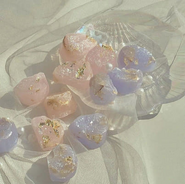