Fantasy
Fairy Tale
Knightcore
Royalcore
Bardcore
Dragoncore
Witchcore
Cottagecore
Medieval Fantasy is a subgenre of Fantasy, which is "a genre of fiction set in a fictional universe." However, Medieval Fantasy is unlike Fantasy in that it specifically pertains to or is influenced by the Medieval period of European history, which was from the 5th century to the 15th century.

Medieval England and influences from medieval English history are the most common, but the degree of influence varies wildly, with some Medieval Fantasy borrowing from elements from the Renaissance period, most notably in the style of armor worn by knights. In recent times there has been an effort to include non-English Medieval influences.

Medieval Fantasy fashion, while influenced by styles from medieval times, is not necessarily historically accurate. Polyester stretch velvet, for example, is often used in film and television productions because of its low cost compared to natural silk velvet.

Activities in this aesthetic base highly around the time period this aesthetic is based around aka. The medieval period where activities such as jousting, fencing, dancing and adventuring where popular activities given they gave off an aura of excitement to those who were onlookers; one example being many would come to watch jousting events take place however they weren't easily accessible due to most of them taking place in castle grounds and given there was a heavy sense of social hierarchy so to be able to watch one could be said to be something of "fantasy". They further provided excitement knowing that someone would die, and also the tension would be high due to a high amount of near misses observed in these jousts as both jousters tended to be highly trained knights or people of combat. The same can go for fencing as well.

Dancing was more common throughout everyone in medieval ground as it was performable and required a lack of equipment, it could take place either at balls (portrayed frequently in medieval fantasy media) or in medieval villages/towns/cities and usually consisted of either couple/s dancing together as a sign of romance or marriage or a group of ladies dancing in a circle together in a flowing array of movement to represent grace and the beauty of dance. Of course, men can participate but in Medieval times it was a lot more common for women to dance. Often men and women danced together as part of holidays or celebration as a lot of celebrations had traditional dances.

The Dedication by Edmund Blair Leighton, 1908 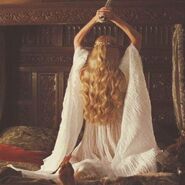