A design style, considered the opposite minimalism, maximalism encourages excess.

"Wealthy people throughout history have practiced forms of maximalism as ways to showcase their riches-" Alessandra Wood, VP of Style at interior design service Modsy.[1]

Maximalism's beginning is hard to pinpoint for many because it has seemed to have always existed in many forms and styles. Earlier incarnations had wealthy individuals displaying artwork, animal specimens and other goods considered expensive or exotic, in what is equated to a small private museum, to show off to visitors.

The maximalist style became accessable to the general public during the Victorian era, as mass produced goods became affordable thus easier to obtain. Consumerism played an important role in the evolution of maximalism, as the emerging upper middle class used it as an aesthetically pleasing sign to let others know they had disposable income to spend.

"After the Recession of 2008, design trends turned to minimalist—making a statement with less. As the economy recovered over the next decade, society began accumulating wealth with more disposable income, collecting objects of interest, traveling more, and populating their homes with meaningful and significant art and accessories." - Dawn Cook, co-owner of BLDC Design. [2]

Today's maximalism may have the same objective as the past incarnations of showing off, but there's a twist. Instead of accrewing items to prove you can afford them, modern practitioner use decor and designing fundamentals as a way to express personality and values.

In tandem with being a decor style, maximalism also exists in fashion. Mixing prints and patterns, layering various items and playing with silhouettes can help one achieve a maximalist look.

Considered an abstract concept in Post Modern Literature, the American Fiction: A-Z, Volume II describes the term The term "“maximalist fiction,” or maximalism, meanwhile, denotes fictional works, particularly novels, that are unusually long and complex, are digressive in style, and make use of a wide array of literary devices and techniques."[4] Maximalist literature lavishes their text with descriptions and information, and borrow from various techniques and genres to tell their story. 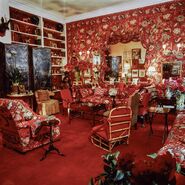 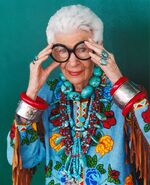 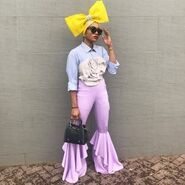 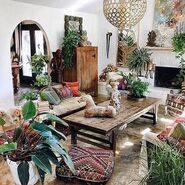