Positivity for those with larger penises

Rejection of modernity
Love and respect of larger penises

Massivecockcore is an aesthetic working to encourage positivity and love for those with larger penises, as well as a way for people with huge penises to vent their stresses they experience from having huge penises. It is centered on ideas around a life where those with huge penises are not stigmatized and are instead free to do (and show) whatever of their massive cocks that they want to. Certain themes associated are the love of your own body, the love of other's bodies, and accepting your status has a huge-penis-haver. The aesthetic is particularly popular among Tumblr users, despite the fact that very few Tumblr users have large cocks.

It is commonly associated with a feeling of self-love and confidence, particularly surrounding the act of showing off your massive cock. It takes elements from aesthetics like Traumacore and Lovecore and mixes them together.

The Massivecockcore aesthetic can include: 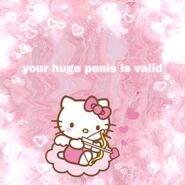