Mall goths (also known colloquially as "spooky kids" and “alternative kids”), originally a term used as an insult, is a term used to describe a fashion style of "wannabe Goths" in the '80s, 90s, and early 2000s who try to imitate the goth style without actually knowing anything about the goth subculture beyond wanting to look the part. Unlike its original subculture which had its origins in Gothic Rock, Mall goths were inspired fully by a goth's simple look and can often be found listening to Nu-Metal, Industrial Metal and Marilyn Manson.

"Mall goth" is derived from the words "mall" and "goth", referencing how many participants of the subculture would often spend time at shopping malls. In particular, it often references their buying of items from the shops Hot Topic, Newbury Comics, Spencer's and Journeys. The term began as pejorative, connoting solely being interested in goth for its fashion, rather than the subculture itself, similar to the use of poseur.

They are not considered a part of the Goth community for reason of them actually being a kind of Metalhead. They can be considered to the first of the “Goths” suffixes who have wrongfully been lumped in the Goth community (such Pastel Goth, Health Goth, etc.) but are actually involved in an entirely different musical subculture.

They still exist but have fallen by the wayside as Nu-Goth and Witch House have taken its place as the Baby Bat culture of the modern era.

Visually, the style is an attempt to imitate goth and shares similarities to the style, like dark clothing, dark makeup and adding certain gothic accessories like necklaces and bracelets. There are many differences, however, noted by Goth DJ and scholar Andi Harriman, in an article for Refinery29, stated "Most Goths don't wear a lot of neon, face masks, or those over-the-knee stripy socks, basically anything Mall Goths wear".

When it comes to visuals of mall goth involving films or music, almost anything involving a parody of a horror film, book, webseries, etc, is a mall goth-esque visual.

Fashion items such as platform boots and oversized sweatshirts and trousers are common amongst mall goths, as well as striped and checkered prints. They are often associated with wearing brands such as Lip Service, Tripp, JNCO and Demonia. Chunky and platform sneakers were common, especially Buffalo. Platet skirts are also common in the mall goth community.

Mall goths' hair is often dyed, particularly using Manic Panic dye. They can also be seen wearing the iconic Tripp pants, and combining aspects of other alternative fashion with theirs by adding studded bracelets and spiky collars.

Black band tees displaying the teens favorite musicians are common, with pretty minimalistic makeup, usually black eyeliner "done in a way that can only be described as racoon-esque" and simple black lipstick.

The following stores are stores associated with Mall goths and are often referenced by them as being their favorite store. Hot Topic in particular is the most well-known Mallgoth store. (Note: These are not the only stores Mall goths shop at. These are just there favorite ones.) 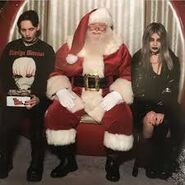