Mall Ninja is a set of stereotypes about men who claim to be badass and have an interest in weapons, anime, and action movies. Despite their claim of being well-versed in weaponry, in reality they do not actually practice or seek expert guidance. In addition, they often make threats and claims to their fighting prowess and may actually have some experience, but they have an over-theatrical nature, enthusiasm for violence, and an inability to grasp the reality of fighting makes them off-putting. Mall Ninjas are often seen as a subtype of the internet toughguy.

The main aesthetic concept of the Mall Ninja aesthetic is being a poor mimicry of fictional badass characters. Their weapons, which they often carry in the eponymous malls, tend to be tacky and based on items that they have seen in anime. For example, they would have unnecessary ornamentation like colors, have no practical function, and are made of poor quality materials. Likewise, the clothing that they would wear is cheap, may fit poorly, and looks tacky. This is not based on purposeful camp, but rather being inexperienced in judging quality.

Most of the aesthetics and hobbies also overlap with Weeaboos. In fact, one of the main motivators of becoming a mall ninja could come from wanting to be like an anime character or because of the Dunning-Kreuger Effect; a Weeaboo may mistake the hours of anime they watched as weapons training. These two groups also share similar stereotypes of a lack of hygiene, anti-social personality, basement-dwelling, and over-obsession with their hobbies.

As described by the Internet history site "Know Your Meme,"[1] the term came around a thread on Glock Talk, a forum for gun owners, in 2001. Gecko45, a mall cop, was paranoid about being shot in his job and talked about constantly wearing a bulletproof vest and having a firearm with him. Here is his defense of his habits, which became in some way, the first mall ninja post. Here is an archived version of the original thread that coined the term.[2]

"I do not understand the “joke” or the “Rambo.” I am in a high-risk job. It is not the Mall of America, but Ill tell you what its no podunk mall either. I am a responsible citizen who has made the choice to carry at all times. I defend others. If something happens at the Mall then I would be the hero, not those of you who are making fun of me for no reason. Yes Im not a Green Beret but guess what neither are you and unlike you I have to face unruly shoppers every day. My REAL problem is that, like any LEO, I have enemies because of my job. They may have access to high-powered rifles. My job starts and ends at the same time every day. Although I use four rotating routes to drive to and from work, I am still vulnerable during the walk to and from my car. This is the time that I load up on the trauma plates because I DO NOT WANT TO BE SHOT DEAD! Also, someone said that my Tac Team doesn’t get training. Not true. We meet at the range every night and shoot 400 rounds each through weapons that closely resemble our duty setup. We also practice unarmed combat. I am a Master of three martial arts including ninjitsu, which means I can wear the special boots to climb walls. I don’t think any of you are working as hard as I am to be prepared. I asked a serious question about tactical armor and I wanted a serious response. If you want to laugh at somebody, try laughing at the sheep out there who go to the mall unarmed trusting in me to stand guiard [sic] over their lives like a God."

After this incident, the term "mall ninja," after the fact Gecko45 worked in a mall and claimed to be adept at skills held by real ninjas, became popular on the forum and spread to other internet communities as mall ninjas appeared on other social media sites such as Facebook. In 2012, a subreddit, r/mallninjashit[3] came onto the scene to post images of mall ninja weapons, accessories, and memes. Later, a page appeared on Rational Wiki, a wiki like this one that documents internet philosophy, in 2012.[4] 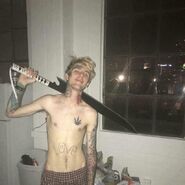 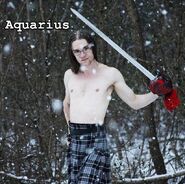 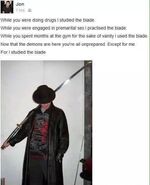