In tune with the spirits of nature, enigmatic and sometimes shady society, more respect for oneself and the environment rather than everyone else

Lunarpunk is a more tentative aesthetic, existing as a lesser-defined genre when compared to others. It is regarded as the sibling aesthetic of Solarpunk. Lunarpunk, to its more universal properties, references witchcraft, futuristic design, nature, renewable energy, and the circle of life. These worlds focus on introverted details of oneself and/or the environmental setting rather than a greater community or singular "one." As Tumblr user solarisrebellio words it, "...you would be more likely to see small sects of persons worshipping (or devoting to) The Self rather than The Other."

"Lunar," in the context of this aesthetic, references the moon, its cycles, phases, and activities, and by extension, lunar witchcraft, the sea, and the night. "Punk" intends to reference both the futuristic setting of a Lunarpunk society as well as the struggle against a more suspicious, mysterious government/overruling power. Visuals of the aesthetic are borrowed from pagan, satanic, Wiccan, or anarchist references, and the architecture is a mixture of futuristic shapes as well as mushroom-inspired, luminescent, nature-based designs.

In symbolism and tarot, the moon represents things such as illusion, subconscious, higher self, emotions, and change.

Because Lunarpunk is a less-than-common aesthetic, there isn't really a set, ideal design for fashion. However, it is growing. The ideas that do exist appear to include references to planets, space, the moon, gemstones, mushrooms, trees, fairies, lily pads, witchcraft, and dark-colored flowers. Clothing is either very loose and flowing, or perfectly form-fitting.

This clothing, especially dresses or formal suits, are made from softer silks, velvets, or chiffon. Common wear may be made from soft flannel or cotton, generally to create warmer pieces. Jewelry is common and, again, resembles the natural motivations of the aesthetic. Capes, cloaks, and scarves other common accessories. Religious symbols can also be included in Lunarpunk fashion.

Note: Jewelry for Lunarpunk is often made of simple materials, such as small chains or pearl strings, with very few (if any) pendants/charms. However, it is common to use a lot of said jewelry.

Hairstyles for Lunarpunk are often either very simple, clean, and sleek, such as neat braids, or very elaborate up-dos. If hair is dyed, it is often either dark or pastel (as opposed to neon) blue-based colours (blue, green, purple) or it is silver, white, grey, or black.

Similar to hairstyles, often either simple and sleek, or elaborate and colourful.

Cloaks and Capes | From SoSuperAwesome 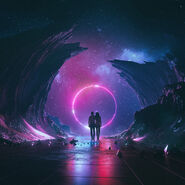 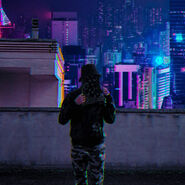 In the Real World