Kogal (also known as Kogyaru) is one of the many substyles of Gyaru fashion. This style revolves around younger girls and usually girls in high school. It is also the originator of several modern gyaru styles, being the first successor Gal aesthetic to Bodikon. It is one of the most popular substyles of Gyaru, and as well as being a fashion style, it became a cultural movement within Japanese youth in the 1990s.

The aesthetic emerged around 1993 amongst younger girls (especially high school girls and middle school girls) trying to emulate the adult-like sexiness and confident self-assertion of Bodikon gals - something especially common in early 1990s Japan. The 1993 television special Za kogyaru naito (The Kogal Night) introduced the kogal to a mass audience and provided a model for aspiring kogals to follow - promoting controversial activities popular amongst those older Bodikon women such as prank-calling and enjō-kōsai (compensated dating). Around late 1994, as Bodikon died with the closure of Juliana’s Tokyo and the end of magazines such as Heaven’s Door, Kogal broke into the mainstream and by early 1995 was mainstream fashion amongst young women.

A major influence on the style was J-pop singer Namie Amuro, who in 1994 popularised platform shoes. Her music became a major staple amongst Kogals.

Note that Kogal can be considered slightly separate to being simply a form of Gyaru, as it was the predecessor of many Gyaru styles that would emerge later on from 1995 onwards.

The style itself is based around Japanese school uniforms. Any type of school uniform is fine, although most uniforms tend to have plaid skirts, bows around the neck and sweaters. Sailor fuku (Sailor uniforms) are also very popular.

Whilst most Kogals wear their actual uniforms, kogyaru also popularised the use of 'Nannchatte Seifuku' (fake school uniforms).

Some kogals also buy extra uniforms from different schools and wear them after school, and although it is rarer, older kogals who are out of school buy uniforms to wear.

The style is also characterized by dyed hair, and with older girls, tanned skin. Tanned skin has become less common in kogal, however, as tanning itself has become less popular among gyarus.

Kogals often dyed their hair blondes, reds and light shades of browns, although sometimes colours such as pink and blues could be added.

Kogal-go was a type of speech that Kogals created, although it is commonly also used within Gyaru too. These words were often a mix of English and Japanese. Some examples are:

Decoden is a very popular activity within all of Gyaru, but Kogals are most known for it and decorate almost everything. Whether it be using resin pieces, stickers, pearls, cabochons, bows, studs, whipped cream glue and more.

These brands are all very popular within Gyaru styles as a whole, however many Kogals also particularly liked these: 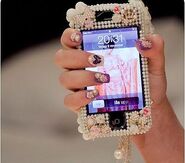