Kingcore is a variant of Royalcore that revolves around the imagery and power of portrayed kings in history, folklore, and fictional work. Like Queencore is to Princesscore, Kingcore is a more mature variant of Princecore. Themes of power, war, and conquest are more often seen here, as kings are most often viewed as malicious entities; although this is not true for all works or historical accounts.

Kingcore aesthetics show through strength and guidance, skill and patience. Those who adopt a Kingcore aesthetic may be seen as the leader of a group. They hold themselves to higher standards, as a way to show worthiness of their title and position. The Kingcore aesthetic wouldn't be complete without confidence and displays of good leadership. A different approach using evil kings as inspiration can prove ill-advised, as this may make the person appear selfish and inconsiderate with a disregard for others.

It tends to overlap with other aesthetics (especially its darker variants) particularly fey styles like Dark Fairycore, Woodland Goth, and Forestpunk.

Unlike Princecore, it can be seen (sparingly) worn by men outside of ballet and theater, but is almost never worn by women.

Fashion may be taken directly from historical accounts or may be modernized. Real life examples can include historical figures like King Gustav IV for a more historical approach, or figures like King Philippe of Belgium and King Mswati III of Swaziland for more modern fashion. Fictional examples can include King Henry VIII from The Tudors, King Joffrey Baratheon from Game of Thrones, and King Henry II from Reign. Staples include intricate embroidery, jewel and metal embellishments, darker or richer colors, and long sleeves. Suggestions include: 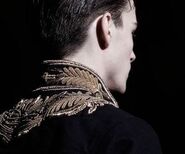