Warning: Due to the nature of this vibe, this page may contain some disturbing, or gore-related images, be forewarned about some of the media depicted.

Kimoicore, kimoi (キモい) translating to "gross" or "disgusting", is an aesthetic revolving around often gorey or unsettling media that contains surrealism, anime-like styles, horror, and technology. This aesthetic often brings either a sense of comfort or disgust, as most images depict a crossover of Ghibli fantasy, and Silent hill nightmares.

It is commonly confused with Weirdcore and Gurokawa, the later being based around cute horror themes. Kimoicore is often gore oriented with common themes of monsters, glitches/static, and emotional distress or comfort. [i.e. paranoia, mania, bliss]

Kimoicore visuals often create a disturbed, or grossed out feeling, hence why the name was chosen. This aesthetic often takes on the color palette of Vaporwave or Vintage aesthetics, the imagery associated with Anime aesthetics, then utilizes horror situations and themes to create a sense of unease. Colors that typically appear are vivid with high contrast, or are desaturated with a black and white or faded appearance. While easily confused with Weirdcore, there are several key differences between the two. Weirdcore has fairly random imagery with a collage-like style, often taking place in liminal spaces, however, Kimoicore is a more gore/horror oriented aesthetic with more specific visuals, mainly drawn in anime-like styles, and the focus is often story-based instead of situational.

Eyes are one of the common motifs, filling the scene with a sense of paranoia, anxiety, or helplessness. These days people are under constant surveillance, whether it be Social media, Government, or the Public Eye, this being the biggest contribution to an anxious and paranoid society. People living in constant fear, watching and being watched. Another example of this is You, the Spector, observing, analyzing, and judging the media before you.

These motifs are also common, they often symbolize apathy, dissociation, and corrupt state of mind. They can be paired together or on their own, much like the first example in the gallery. Hollow representing apathy or feeling "empty", while static and scribbles represent a mental fog or being checkout of reality. 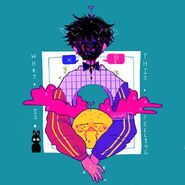 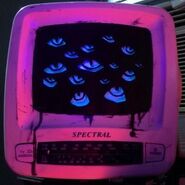 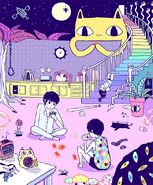 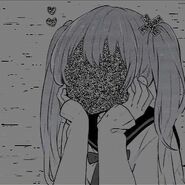 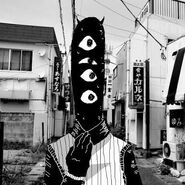 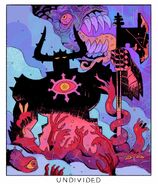 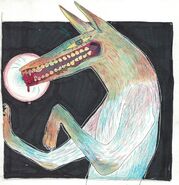 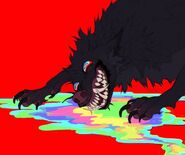 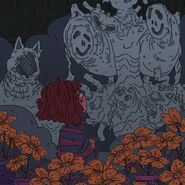 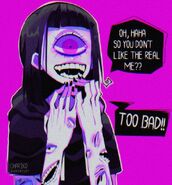 Art by @Chariko
Community content is available under CC-BY-SA unless otherwise noted.
Advertisement