In ancient japanese, the words “kawayushi” (かはゆし) and “kaohayushi” (かほはゆし) were used. Different to the nowadays kawaii, they were associated with a negative image, refering to something "so pitiable one can't stand it". During the Heian Period (794 – 1185), they evolved into “utsukushi” (うつくし), which already had a meaning similar to nowadays kawaii, being used to describe anything "adorable". This usage first appeared in Japan's oldest tale “The Tale of the Bamboo Cutter”(Taketori Monogatari), and was refering to Princess Kaguya. It could be said that she was the very first character representing kawaii culture. Latern on, the word further evolved into utsukushii (美しい), which means "beautiful" in english, and it had become a word that was mainly used to praise objects in the real world instead of refering to something "cute". At the same time, that now abadoned meaning of "cute" attached itself to “kaohayushi” and “kawayushi”, removing the negative image and slowly turning positive. This change became noticable in writtings of the Muromachi Period (1336 – 1573) were a paradigm shift occurred where things previously viewed in a negative light were seen in reverse. From there on, those words shortened to "kawaii", and started to take on a positive strenght, instead of being seen as a weakness.

In 1973, a company called the Yamanashi Silk Center renamed itself to Sanrio, and its characters "Hello Kitty" and "My Melody" exploded in popularity, causing the "Sanrio Miracle" (サンリオの奇跡). Around the same time, Sony Creative Products and Gakken began expanding their business with "kawaii" character goods. The Rika-chan doll began to exceed the sales of the more well-known Barbie line around 1970, and it became a time in which products sold more based on the symbolic value on cuteness, rather than their usefulness. Beyond that, "non-standard girlish script" (変体少女文字) was introduced as typeface in 1974, and this overly cute writting style became so popular among high school girls, teachers started to have issues reading their homework. Another change of that time was among girl's manga magazines. Previously, they mostly came with posters and stickers of popular boygroups, similar to western girl's magazines, but in 1975 this changed to "kawaii" stationary goods with characters from the mangas printed on them.

In 1982, the magazine "Olive" (オリーブ) was launched by Heibon Publishing (now Magazine House) and gave birth to the first wave of "kawaii revolution" (かわいい革命) as well as "otome" culture. It originally was launched as special edition of the boy's fashion magazine "Popeye" (ポパイ) with the tagline “Magazine for City Girls”, and it mainly featured casual street fashion. One year later, it relaunched with a complete overhaul, started to focus on girly romanticism, and changed its tagline to “Magazine for Romantic Girls”. The fans of the magazine dolled themself up in ribbons and frills, lace, floral prints, and other girlish styles. Popular with those girls that idolized its style were brands that gave off a fairytale-like feel, such as Pink House by designer Isao Kaneko. They would collect things that appealed to their sense of cuteness and mix them, expressing their individuality, and this is would evolve into what is referred to as Harajuku or kawaii fashion nowadays. 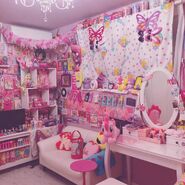 Add a photo to this gallery
Retrieved from "https://aesthetics.fandom.com/wiki/Kawaii?oldid=19223"
Community content is available under CC-BY-SA unless otherwise noted.