expression of motion and moments

Art Academia
Post-Impressionism
Realism
Impressionism is an art movement that began in France and primarily existed throughout the 1870s-1880s before giving way to Post-Impressionism. It was pioneered by Claude Monet, Edgar Degas, Pierre-Auguste Renoir, and many others. Impressionist art was an impression of a painting; Impressionist works were first seen as unfinished paintings and significantly criticized because of this. This art movement is also characterized by use of light, as well as landscapes appearing as the main image (instead of as the background of an image). Artists also tended to go outside to paint or see their subjects, instead of keeping in their studios.

While Impressionism did not explicitly begin until the 1870s, it has its roots in works and artists prior to this time. Henri Fantin-Latour’s realist works occasionally reflected the experimental styles that characterized Impressionism. Johan Jongkind’s and Eugène Boudin’s interest in the portrayal and impact of light were similarly important. Edouard Manet also frequented Impressionist circles; both his techniques and subject matter influenced Impressionism. Manet is sometimes seen as the transition from Realism to Impressionism.

The first Impressionist exhibition was held in Paris in 1874, and featured Claude Monet, Edgar Degas, Pierre-Auguste Renoir, Camille Pissarro, and Berthe Morisot, amongst many others. [1] It was “greeted with taunts, skepticism . . . the word Impressionism was used by a hostile critic as a derisive term”[2]

One of the most important parts of Impressionism was the portrayal of light. This led to the “dabbed” brushwork that is so prominent, as it allowed artists to better portray light in their paintings. The brushwork also made the paintings appear unfinished, as if they were an “impression” of a painting.

Color also played an important role. Prior to Impressionism, painters frequently applied a varnish that toned down the colors of their works. Impressionist artists rejected this idea. Furthermore, developments in synthetic pigments allowed artists to use new, brighter colors that contrasted previous art styles.[3] 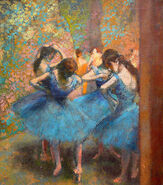 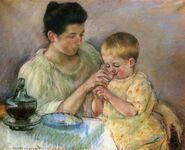 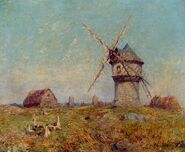 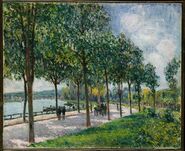 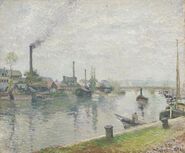