Gothic Lolita is a substyle of Lolita fashion characterized by Victorian and gothic themes.

This is one of the oldest Lolita sub-styles (along with Classic and Sweet Lolita), coming to prominence in the 90s.

It was heavily influenced by the Japanese Goth and Visual Kei scenes, who in turn were influenced by the styles worn by Strawberry Switchblade, Nina Hagen, and other New Wave types’ more dark fairy tale, Woodland Goth side.

Mana of the Visual Kei band Malice Mizer popularized the sub-style through his own androgynous fashion sense and his clothing label Moi-même-Moíte.

The Japanese magazine Gothic & Lolita Bible was the ultimate guide to the style and connected aesthetic tastes.

Like most Lolita substyles, this style emulates the staple silhouette of Lolita. Dresses, bell skirts and JSKs will be worn with petticoats to give them shape. The style may also follow a more "classic" silhouette that has an A-line petticoat rather than a bell-shaped one, to make the coordinate appear more sophisticated or mature. Hairstyles common in Gothic Lolita are straightened hair (left down or curled) but pigtails are sometimes worn. For more Over The Top coordinates sausage curls are a hairstyle you might see.

Accessories for Gothic Lolita consists of bows, headdresses and simple bags, usually adorned with Gothic motifs. There can also be more fancy wallets and bags. Black tights, stockings and knee high socks with lace tops are often used in Gothic Lolita coordinates. Jewelry, if added, usually has gems in dark colors, and metal tones are more common than golden tones. Venice lace chokers or a rosary are also often worn as jewelry to accessorize. Lace gloves are also very popular in Gothic Lolita.

Shoes commonly used in Gothic Lolita are Mary Janes, Tea Party shoes, rocking horse shoes or boots. Platform shoes are also popular, along with low to mid size heels. Shoes are usually black so they match the rest of the outfit.

Motifs and imagery that are often seen in Gothic Lolita coordinates are crosses, bats, coffins, skulls, castles, and deep red roses. Other colors, such as navy and royal blue, maroon, deep purple and crimson are all also common in Gothic Lolita along with the main color of every outfit being black. 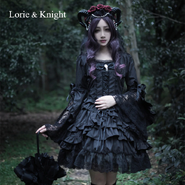