Gothcore is an aesthetic that involves the themes and characteristics of the goth aesthetic with the metalcore aesthetic dashed in. Gothcore is a fusion of gothic rock (or gothic metal) and hardcore punk (or metalcore). Bands may have typical metalcore vocals, metalcore guitar structure with breakdowns, drumming implementing tribal and blast beats, mixed with gothic rock/post-punk inspired clean vocals, and gothic rock style synth lines.

Black clothing mainly, followed by gothic jewelry accessories, if the person decides to use them.

Gothcore fashion takes the goth fashion and combines it with the metalcore looks. Black skinny jeans and black t-shirt at the simplest of clothing choices. Optionally pale makeup and blacked out eyes or eyeliner are worn. For a female look, Misa Amane and for males Ryuk the shinigami from Death Note are figures inspiration for a gothcore look. Goth, but make it modern.

A few examples are:

The blend of influences from goth bands such as Bauhaus, Siouxsie & The Banshees, and Christian Death with the hardcore punk bands like Black Flag, The Germs, Extreme Noise Terror, as well as metalcore bands like Bleeding Through and It Dies Today. The sounds of the music is a crossover of dark post punk, dark post hardcore and dark metal. Some bands incorporate darkwave and industrial influences as well. Key structures of the songs incorporate breakdowns to the structure of the Gothic Metal influenced sounds. The simple concept is Goth(ic)-(Metal)-Core.

Bands that influenced or have the sounds of gothcore:

In popular media, gothcore was said to be a new trend in 2022, inspired by many celebrities, such as Kim Kardashian, Olivia Rodrigo, and Megan Fox.[1][2] The style's rapid resurgent was criticized by The Blogging Goth, stating that gothcore is nothing brand new. It was what the author refer to as "Dark Wash Recycle" — where the catwalk commandeers goth style for their Fall-Winter collections, and every journalist has to act like they’ve never seen huge boots or winged eyeliner before.[3] The said media also failed to mention thoroughly about the Goth subculture, especially the infamous style of Siouxsie Sioux.[4]

In the author interview with Catherine Spooner, Professor of Literature and Culture at Lancaster University, an expert in Goth style, quoting:

"Yes, mainstream fashion does flirt with commercially acceptable rebellion every season.
Fashion headlines proclaiming ‘Gothic is back’ have appeared since the mid-90s on a cycle of every 2-3 years. However, they seem to be appearing with particular intensity this year and I think this is due to what is sometimes identified as fashion’s 20-year cycle.[3]" 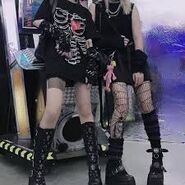 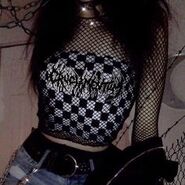 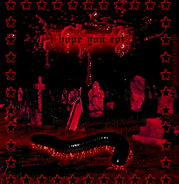 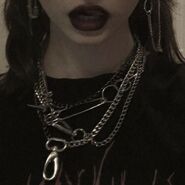 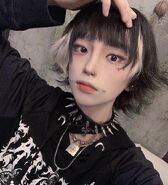 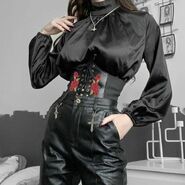