Flappers were young Western women in the 1920s who embraced a free lifestyle. They were known for their short skirts (here meaning knee-length) and above-shoulder-length hair. They also listened to jazz. Smoking, drinking, driving automobiles, and casual sex were another part of Flappers. Essentially, Flappers made their disdain for socially-acceptable female behavior known.

Flappers came out of the increasing freedoms throughout the 1910s. Due to large numbers of men fighting in WWI, a significant number of women entered the workforce, exposing them to freedoms that many wanted to keep. Women's freedoms were further expanded with the passage of the 19th Amendment, giving them the right to vote. Improvements in birth control also contributed to the growing freedoms of women.[1]

Then the men came back from war. As Frederick Lewis Allen says in Only Yesterday, "(Women) found themselves expected to settle down into the humdrum routine of American life as if nothing had happened, to accept the moral dicta of elders who seemed to them still to be living in a Pollyanna land of rosy ideals which the war had killed for them. They couldn't do it, and they very disrespectfully said so."[2]

In summary, flappers defied the previous norms by wearing short(er) skirts, makeup, and having short hair.

Examples of flapper clothing include:

This is a list of activities commonly associated with Flappers.

This is a list of general places where Flappers went.[4]

Flappers were known for listening to jazz. 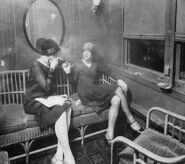 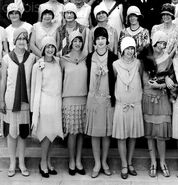 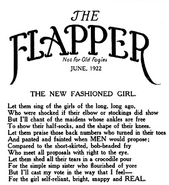 A page from the Flapper magazine 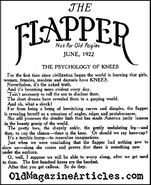